Minigolf Plus
for Amiga (OCS/ECS) 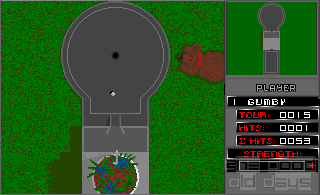 The established way of putting minigolf on the computer doesn't allow for much variation. You get your courses in an overhead view, aim and gauge your next stroke (usually using the mouse) and hope for the best. Minigolf Plus implements exactly that, for better or worse.

In such a by-the-letter game, there isn't really much to discuss. Minigolf Plus does not set itself apart with its pedestrian graphics, its ok controls or even its courses. The latter contain exactly the standard obstacles which you also know from your local course in the real world, and even though they may look different from time to time, gameplay-wise, they will all come down to the same thing.

The devil's in the details. For example, why is there no support through a geometrical line for direction when aiming? When determining the strength of the shot by duration of clicking, on the other hand, works well enough. On the negative side again, why is there no way to get a real overview of the course, but just a coarse mini-map?

Small things like these can really make or break a game in such a genre. If the interface suffers from some rough edges and the courses are all bog standard as in this one (meaning that the advantages or having a virtual as opposed to a physical environment have not been used), why choose it over one of the many, many other games which are 90% identical anyway, but maybe do two or three things just a little better?

Indeed, why call this game Minigolf Plus when there is really absolutely no “plus” in the game – compared either to real-world courses or (again) similar computer games? If your game does not really cut it, what is your plan to market it? After all, a Minigolf theme may not be the instant selling point for spontanous buyers who haven't read reviews before deciding. Questions, questions… 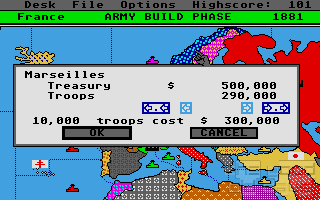