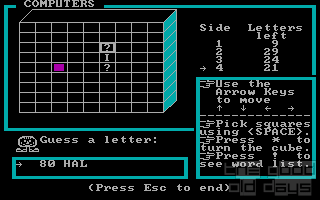 Crypto Cube was part of IBM's Education Family of games. It was written in 1983 and contains subject matter from that time. For instance, the computer terms are somewhat out of date. It's fun for a little while to see what some of the old games used to be like but is nothing extraordinary.

The game supports both one and two players and also generating your own puzzles to save and use later in the game.

The player(s) enter(s) their/his name(s) and select(s) a puzzle category from the built-in list. The user then tells the program to either make a new puzzle or use an existing one. Once a puzzle is generated, the game presents one side of a four-sided cube. The player then moves the cursor with the arrow keys to select portions of the cube and uses the space bar to see what is under that section of the cube. If a question mark is revealed, the player guesses a letter. If guessed correctly, the letter is shown, if not, the spot remains a question mark. Vowels are automatically revealed if selected. The user can change cube sides at any point and must solve all four sides of the cube.

The graphics are CGA and are fairly standard for the time period. There are simply graphics and very basic use of color. Since the game is a puzzle game, most of the graphics will be text and help menus.

If the player selects to create their own puzzles, they must create a separate puzzle disk on which to store the contents. This extends the playability of the game somewhat as more relevant puzzles may be used other than the default Transportation, Animals, Easy Animals, Things to Eat, Things To Wear, Computers, Sailing, Cities, Boys' Names and Girls' Names options.