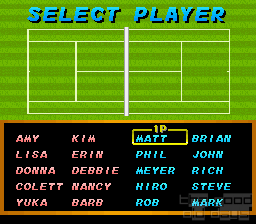 One thing before: I am, presumably like 99, 997% of humanity, not a tennis fan. Actually I detest tennis. Now the reader asks: “Why the hell does this guy write a review of a tennis game?” I am an employee at a public service und therefore working in several offices from time to time. There you have - you can easily imagine - a lot of time to fritter away. What are you doing then? That's right! Gaming! But what? Everyone who has ever spent eight hours playing Minesweeper or Solitaire knows that there are more refreshing games. Other games like Counterstrike that enforce themselves in huge network (2000 computers) are unsuitable either, if you don't want to surprise your boss with sudden “Yeah!!! Head shot!!!” interjections...

To make a long story short: Super Tennis is the ideal game for wasting your time. It keeps you busy without becoming arduous, but it offers a certain varity as well. In addition, you can save your game anytime with an emulator (very important if your boss is sneaking around the corner!).

In the game, there are three basic modes. “One Player” is a match against AI, “Two Players” against or together with another human/colleague. “Circuit” is an entire season (one working day).

In addition, you can choose between singles and doubles, whereupon you decide for one of the participating characters. There are women and men who have different strenghts and weaknesses (service, return, baseline play, etc). This is one of the advantages of the game as it provides for a lot of diversity. Afterwards, you can choose a ground to play on (grass, clay, hard court), and then it starts.

The handling is principally easy: Four buttons for four different types of strokes (lob, top spin etc), and by means of L and R buttons you are able to influence the direction and range of the ball, and spin it.

The graphical depiction of the rallies is partially imprecise, in such a way you sometimes miss the ball. However, the tolerance of the game concerning “hitting” and “missing” the ball is quite big, so that you can get along with it. The real disadvantage of the game is that changing sides after two games means a complete changeover. As the camera position does not cange when you are standing on the other side of the court, your figure is quite far away suddenly, and therefore hard to control.

Speaking of the graphics: The game, one of the first ones to be released for this system, offers typical SNES graphics, if that tells you something. The conciliator somewhat reminds you of Super Mario, the linemen seem to be twins, and the players look like children considering their height. But that's not that fatal, it rather emphasizes the “now and then” character of the game.

A real highlight of the game is the season mode. You can compete in up to eight tournaments, splitted into each four small and large ones (so called Grand Slams). The participation, however, is not obligating, but you should play some of them in order achieve a good ranking on the scorecard. If you play too many of them, your player wears out and his abilities decrease. After finishing a season as the best one, you… Don't ask me, I never accomplished. It costs a lot of time, patience, or some cheats. 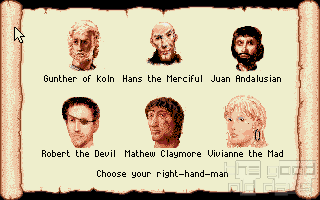