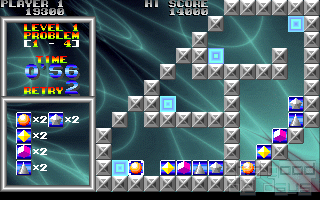 Brix is a unique puzzle game in the sense that you can move blocks instead of just swapping places with another. This does create a huge barrier in the later levels when you may be fighting not one, but multiple times events.

Brix is a clone of Puzznic developed by Taito, but with a bunch of added features that the former did not have.

The goal of the game is to clear the game board in the allotted time by matching two or more like blocks. As you match blocks, they will disappear from the board. Along with blocks you must match there are also blocks that move, disintegrate, trigger events, and teleport your block to a pre-defined location. One of the best mechanics that Brix has introduced is flipping the entire level vertically. As the blocks are affected by gravity, some areas are only accessible after flipping the level vertically. This does pose a problem in later levels where you are battling the disintegrating blocks and the flip mechanic at the same time.

The visuals in this game are very colorful and pleasing to the eye. Nothing to write home about here, but they get the job done.

The music is what you'd expect from an Epic Megagames title with support for the Sound blaster. Nothing particularly special, but it is nice having music to accompany the addicting gameplay.

The controls are about as tight as they can get for a puzzle game like this. Your key presses are exact and don't register more than you'd expect them to.

Brix is a great puzzle game for those looking to enjoy some brain teasers. Although the game can get very difficult in the later levels you can expect yourself coming back to it to figure them out.