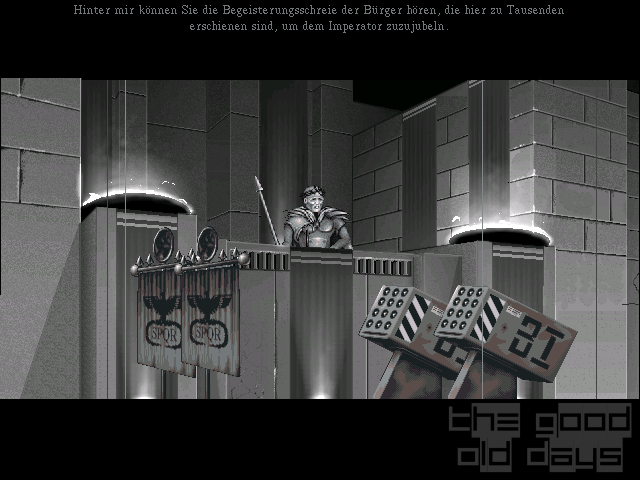 Graduating from promotional games to full priced ones isn't all that trivial. Where Abenteuer Europa may have been quite alright by the standards of the promotional genre, it wouldn't have looked so hot in the 50$ range. Which begs the question whether Imperium Romanum is just such a conversion. Some sprites, at least, look awfully familiar, even if they appear is formally different roles…

The plot revolves around Gaius Ludus, slave assistent to a senator carrying some weight. Completely by chance, he comes across a pamphlet promoting the revolution for a free Rome (and Roman occupied areas). Which also happens to mention a hidden stack of gold. If that isn't some great motivation to rebel! Well, at least in small ways – for example by tripping the boss' moron son, spray an insulting slogan (Romanus eunt domus?) on the wall right opposite of the pretorian guard's barracks etc.

We are obviously well inside comedy territory here; Imperium Romanum would love to be Life of Brian, but its punch lines only puts mild smiles on the players' faces at best. Mostly, the lines, the slapstick gags, the characters and the sense for situation moves along predictable lines. With that basis, the fantasy component of introducing modern-day technology and attitudes into Roman society doesn't improve things much. Exerted silliness is probably the best way to put it. If that's your sort of thing…

Graphically, there has been an earnest attempt to go with the times. Optionally, the game can be switched from the usual 256 colours to "true color". Little visual gimmicks like reflections and additional shading can be switched on where hardware allows. Even disabling all of this does not prevent visible loading times moving from one screen to another, however. Also, none of it changes anything concerning the coarse look of some sprites, which becomes all the more apparent when moving around, as they are zoomed to ridiculously inflated proportions. Just as using a 3D rendering application will not prevent incorrect perspectives automatically or smoothen the twitchy animations.

Gameplay follows well-known patterns. As common at the time, most of the roadblocks appearing in front of the player can be cleared by repeatedly exhausting dialogue trees with other characters. Which doesn't work perfectly well, as there is usually no indicator that another round of talking may reveal new things, even though the game expects it to progress. On top of that, although information is the main currency used to progress, it is not modelled explicitly inside the game, for example as inventory objects.

At least compared to the trip across Europe referenced earlier, which virtually played itself, much more is demanded of the player. Of course, as expected nothing is actually hard; the game world is compact, the number of objects the player is carrying around as well as those stationary ones is strictly limited. Which at least is a positive reason for a low difficulty level.

Meaning everything is quite solid, but also in no way outstanding. It's a square game. The fact that it is really a short one doesn't even strike me as negative: it seems the developers knew how far they could go without getting on the player's nerves. Interpreting it in a positive way at least. Imperium Romanum won't offend anyone. If you've beaten all the common classics to death already and really still want more… why not?