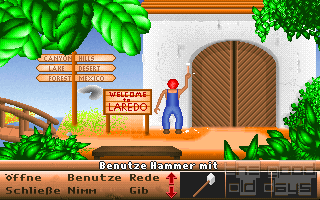 Donald Reddish wants to leave his parents' farm and go west. It is, he heard, where all the adventure is. Arriving in Laredo, just at the Mexican border, he sees the perfect opportunity: the position of local sheriff is open. Ignoring the warnings that all the previous ones are now ten feet under, thanks to a certain Leslie Marbosh, Donald applies for the job.

As for every other job, the way to get there involves a couple of trials… whether you want to become a pirate, a sorcerer or a sheriff, there is always a panel of guys giving you trials to perform. In this case, in a total break from tradition, it is a whole four of them. Plus, you have to provide your own uniform. Because, you know… actually, I have no clue why.

Anyway, the trials test Donald's intelligence (an actual intelligence test of putting abstract shapes into order), his fistfighting ability (being a total wimp, he has to trick his way through this one), his shooting (straight action sequence) and bravery (random, unexplained action). In Adventure terms, the highlight of this game phase being when you have to find the one hidden object necessary to pummel the giant boxer. After becoming sheriff, things don't become much brighter. There are some errands to run, some criminal cases to investigate, and finally, there will indeed be the need to confront Leslie.

In principle, this game structure "inspired" by bigger titles isn't so bad. You start in a restricted game world which gradually opens up, allowing for a smooth beginning. Though that's about it as far as positive aspects go. In fact, the game world is as unimaginative as it goes: each room has exactly one bland character inside whom you can exchange a couple of lines with and other than that a couple of hotspots, most of which are irrelevant and only serve to obscure what is actually important.

The initial tasks range from totally obvious (intelligence, shooting, fighting) to nonsensically: what do I have to do for "bravery"? Where would I get a uniform? The solutions to the two latter being totally random, of course. One, you may not even realize when you have already solved it. There is an attempt to disguise the totally random nature of the tasks and proceedings as "zany humour", for example when Donald falls into a well only to emerge on the other side of the world. I have laughed harder in my life. Admittedly, it is quite hard to make a game actually funny. Though above the "loser attitude" of its protagonist, it seems this one doesn't even give it a serious attempt.

Especially when such things occur surrounded by the worst gameplay sins. Of course, you will spend half of the game running through an incredibly boring forest maze. Lacking any imagination to come up with real puzzles, you spend your time finding hidden objects, which may be located beneath other things or be the size of only a single pixel. Or my personal "favourite": attempt to take the same object six times, although its owner has stopped you before; he will then simply let you (in spite of having giving no indication of changing his mind before). Just to use this object for something which could have easily been done with many other things lying around unguarded. Graphics… unbelievable, no further comment necessary – and the animations improve absolutely nothing.

It is hardly imaginable that Donald Reddish should have been commercially available at some point. It is severely lacking in absolutely every respect – even the blatantly obvious ones, such as visual appearance. No wonder it is virtually unknown today.