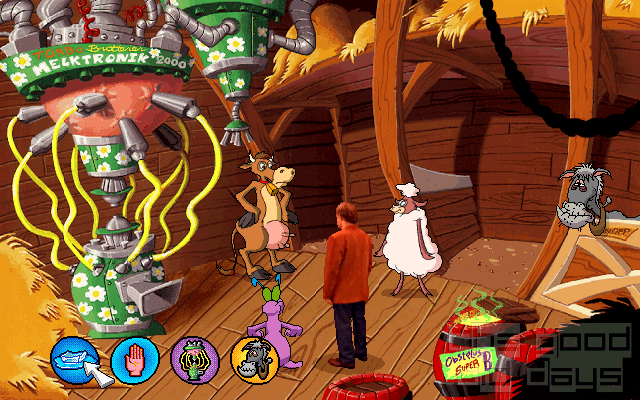 In the late 80s, there was this little film called Who Framed Roger Rabbit. You may have heard of it. Its big selling point was seamlessly (well, as far as possible) combining live action characters and animated footage. Although it was a considerable success, the avalanche of imitations didn't arrive, as the process of integrating these two visual worlds proved to be a huge effort (if done right). Cool World, an artistic and commercial flop, and the disastrous Space Jam remained the only other such films of note. Computer games, however, played on relatively small screens, still had much lower demands as far as visual perfection was concerned in the mid 90s. So we got Toonstruck.

The game features Christopher Lloyd (familiar from the Back to the Future films and also a veteran of Roger Rabbit) in the role of cartoon artist Drew Blanc. His biggest success, a fluffy cartoon rabbit show, has burnt him out to the point of writer's block. In the middle of the night, not being able to sleep, he finds his TV switched on inexplicably – and he is sucked in (literally). Finding himself in the cartoon world of Cutopia, he is immediately enlisted by King Hugh for help: the evil Count Nefarious has devised a ray with which he turns the harmless inhabitants into dangerous monsters and the formerly flourishing meadows into wastelands.

The first impression is excellent: the animation, especially in the cutscenes can actually compete with those of the classic cartoons it attempts to imitate. Lloyd is integrated well enough into the scenery as well. Him picking up and using objects looks convincing where it counts. Voice acting, performed by well-known actors such as Tim Curry and Dan “Homer Simpson” Castellaneta, is beyond any doubt. The controls, based on the single-click philosophy applied on clearly visible and sufficiently large hotspots, work intuitively. Thematically, there isn't much room for complaints, either. Characters are appropriately quaint, such as the “Carecrow” or the sleazy-polite Big Bad Wolf. Visual slapstick gags occur frequently. Puzzles often follow cartoon logic as well, which could be a disadvantage in many other games, but feels quite natural in this case.

In spite of all those qualities, the immensely positive reviews the game received at the time and the huge following it has gathered over the years is somewhat irritating.

One major weakness is pacing. Classic cartoons are not actually known for having a lot of dialogue. Toonstruck, on the other hand, is incredibly chatty. As professionally as they may be voiced, listening to these characters for minutes brings the overall world, which should be in constant movement, to a grinding halt each time. Speaking of movement, some additional background animation – even if not “relevant” in matters of progress – would have been welcome.

This makes the game last quite long. Knowing that the final game is reportedly only half the size of the original script, it is already borderline to overstaying its welcome – depending on the player's patience. The protagonist's sidekick, purportedly his favourite creation, quickly becomes annoying with his constant pseudo-sarcastic wisecracking. Sure, it is interesting and in places satisfying to re-visit locations which you have seen at the beginning of the game later, after the scenery or the characters have been hit by the evil guy's changer beam. Though that's actually one of the few things keeping the player motivated long-term.

Make no mistake: Toonstruck is indeed one of the better Adventure games to have come out of the second half of the decade when the genre disappeared into its own ass with a slew of mediocre games. Technically, it is as close as being an interactive cartoon as it was probably possible at the time. If it just had some more action, if it moved faster – then it would indeed be one. 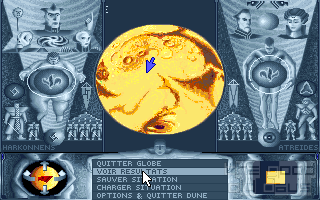