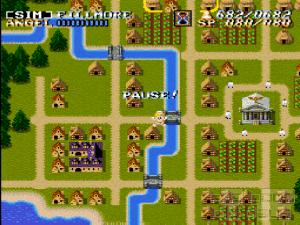 Story: You are the supreme god of the universe. Normally, that's rather a good position to be in, but now the demon Tanzra has stolen your powers and infested the whole world with monsters. One last angel is all you have left...

To restore your powers, you'll need to restore humanity's faith in you. To do so, you must first make some room for your colonists (by killing monsters), then help them build a prosperous colony (while you're killing more monsters), and then wipe out the rest of the monsters in that area. And that's just level 1...

About the game: Adventure/God sim is quite an original combination, and that's where the only real problem in this game is. Most people who like adventure games seem to dislike simulation games, and vice versa. And while the adventure-part of this game is quite good, the simulation section is very simple.

That's why it wasn't too popular. The adventure gamers hated building, and waiting until you had enough colonists to grow in level, and the sim gamers thought it was too simple and had too much adventure... Myself, I like both parts, so I think it's a good game

Difficulty: The game's certainly a challenge in the later levels, where it becomes VERY difficult to get through the adventure sections, and new monsters appear in the sim sections. At least you can't die there... Instead, when you have no life left, you get to watch the monsters destroying your colony while you are unable to fire a single arrow.

Good points:
- It is quite a long game, it'll keep you busy for a while, even though it only has 6 sim levels.
- Difficulty (Finally, a game I can't finish in a single day)
- Nice graphics, certainly for a game published in 1991

marco:
im like games
David:
A loved this game back in 1992, and I like it still. I guess I'm part of the minority who liked both the sim and adventure sequences (the latter eliminated in the sequel, if anyone wanted to know). Give it a try, it could very well be of your liking.
Hikarr:
It's a really good game and I loved the mix of defeating the monsters and building up the towns. Some of the small "sim quests" are good too, where you lead the villagers to places and use the right objects in different places. And the music is great.
Cenda Muris:
IT`S A VERY GOOD Page!
Johann67:
Feel free to share anything about Actraiser (1991) here!
[Reply] 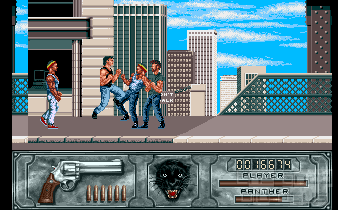