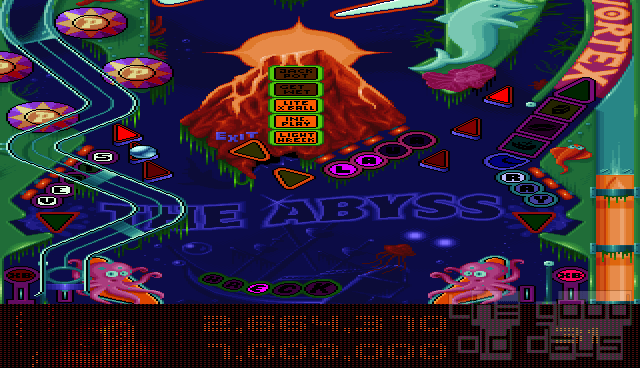 Initially known as a budget game developer, Codemasters had slowly moved into the full price spectrum. By the mid 1990s, it had become accepted practice to simply release games of small proportions in the full price range anyway. What a perfect opportunity for such a studio!

Psycho Pinball looks and mostly plays exactly like one of the incredibly successful genre hits from the competitors of 21st Century. Same screen layout, same controls and (thankfully) similar ball physics. Tables share similar elements (well, it is pinball, after all), with multiball and top paddles being standard features. The tables do show some variety insofar that there is one with many ramps so that there is kind of a cramped feeling to it whereas the next one has quite some open space, leading to a different play style.

The coup here, however, is the Trick or Treat table. Apart from playing it regularly, you can also move to the other tables right from there by triggering certain events. I.e. you play a little Trick or Treat, shoot the ball in the right place and zoom – there you are on another table. If you lose a ball there, then, you are just dropped back to Trick or Treat again.

Certainly nice, but if you play too successfully, you will actually spend a long time on those other tables and forget all about your state in Trick or Treat. So as nice an idea as it may sound at first, it is really more of a gimmick. Just as the "high resolution" mode which doesn't actually show any more of the table anyway.

With the full price tag not being "enforced" anymore these days, Psycho Pinball shows its strengths in spite of some of its features being only for show. Fortunately, the developers didn't just rely on these, but also managed to get the core values right. It's not the game to revolutionize the pinball genre, but an entry to enjoy anyway.

casmith (2018-04-13):
It was pretty well done for it's time with their other themed tables great little game for pinball lovers.
[Reply]