The Lords of Midnight
for ZX Spectrum 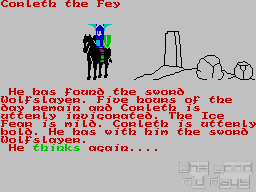 Sometime, the time is just right. In 1984, along with its contemporary Elite, The Lords of Midnight broke completely new ground. To really understand how revolutionary it felt, you have to take yourself back to the computer gaming world of the early 1980s. The video game console market had just crashed. Somewhat affordable computers were slowly making their way into people's homes (hence “home computers”), but gaming-wise, the formulae inherited from the arcades and already imitated by said failed game consoles were still the norm: simplistic twitch gameplay, usually on a single or few screens. The only thing added in home computer context was the occasional puzzle or board game, ported over straight from the physical world. And then, out of nowhere, these new games came along.

While maybe slightly exaggerated, it was still staggering to see a game such as Lords of Midnight which was just… huge! So far and so complex that it couldn't possibly be done in physical (board/card game) format and certainly diverged drastically from what players were used to from arcades or consoles. 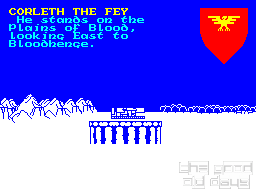 It is only appropriate that designer Mike Singleton chose the epic work of nerd culture to base his own epic on: The Lord of the Rings. In a thinly disguised way, you get Moon Prince Luxor and his son Morkin who attempt to organize the resistence against the invasion of Doomdark, the evil Witchking, who sends his evil hordes from the icy wastelands of the north towards the prosperous south. The player has two options to win the game. Either, Luxor and his allies obtain the support of the other local lords who are minding their own business at the beginning of the game and together beat Doomdark's armies in the open field, finally capturing his home fortress. Alternatively, Morkin – the only person immune to the the “ice fear” – can steal and destroy Doomdark's ice crown in the same fires where it was forged. It is not hard to see the equivalent roles in Tolkien's stories.

Controlling Luxor, Morkin and their two initial allies directly, the player receives total freedom to move them around in turn-based fashion across the map consisting of ~4000 squares. Movement costs depend on type of terrain: crossing mountains obviously takes more effort than riding across plains. Random monster encounters may occur at any time. And then, of course, there are ruins which can be explored to find artifacts, armies which can be recruited and so on. At the end of the day, each character needs to rest for the night, recharging his energies. Hopefully in a safe place, like a village. All player-controlled characters can actually travel in different directions, thus covering a much larger part of the map in a shorter time. This advantage is further improved by recruiting additional lords to join Luxor's cause. They, too, will then become controllable characters, so that after some time, each game day becomes a complex military operation. Careful, though, as not every Lord will join if asked by the wrong person – racial or personal conflicts have to be taken into account.

Imagine such strategic and tactical challenge, with such a degree of freedom to make major decisions leading to completely different paths the game can take. Then remind yourself that your favourite game at the time was probably Manic Miner – a fine game for its time and on its own right, but a trifle compared to this one. And it wasn't just size: Lords of Midnight manages to find an amazing balance in its game elements, be quite challenging, but remain fair at it.

The amazement didn't even stop there. Each map square is actually represented in a three-dimensional view. No, eight three-dimensional views, actually – one looking into each compass direction. All in blue/white plus few colours for creatures, but nevertheless, unheard of at the time. Again, put yourself in the perspective of the mid 1980s. One of the finest role-playing games of the time, The Bard's Tale, also employed a three-dimensional view, but the only way you would learn about a monster encounter was through being sent straight to the combat screen. You walked around blindly. Lords of Midnight actually showed potential enemies of allies ahead and gave you the opportunity to adapt your path. The secret of this large, illustrated world of course being that these screens are not pre-made and stored in the strictly limited memory, but rather generated procedurally on-the-fly out of little Lego bricks. Another similarity with the previously mentioned Elite…

So much for the historical perspective. How do The Lords of Midnight hold up today?

Surprisingly well, unless the graphics scare you off. The keyboard controls work quite efficiently once you memorized the main keys. Strategy and tactical considerations are timeless. In a break from today's expectations, what may be somewhat irritating at first is that to interact with somebody or something, you first need to move “on top” of it. When you see it on the screen, you're not there yet.

Nevertheless, it is not the huge, impressive epic it used to be anymore. As common at the time, the plot is entirely laid out in the documentation. Plot progress only occurs in the player's mind. Characters you meet (i.e. the lords) don't show any character, actually. Save for their name, their alligiance and their army size, not much sets them apart. Even artifacts, clearly intended to inject a bit of a role-playing feeling, are quite random.

In summary, one could say that Midnight would classify as a draft game nowadays. The basis is all there, and even that alone offers a lot of fun already. Yet, it feels incomplete, like it should have been fleshed out with many additional flavour elements. From a historical perspective, it is completely understandable why it is the way it is: storage and memory limitations would simply make it impossible. So the retrospective gaps are forgiveable. Yet, they are there. The game did age, but not too badly.

Mr Creosote:
Feel free to share anything about The Lords of Midnight (1984) here!
[Reply] 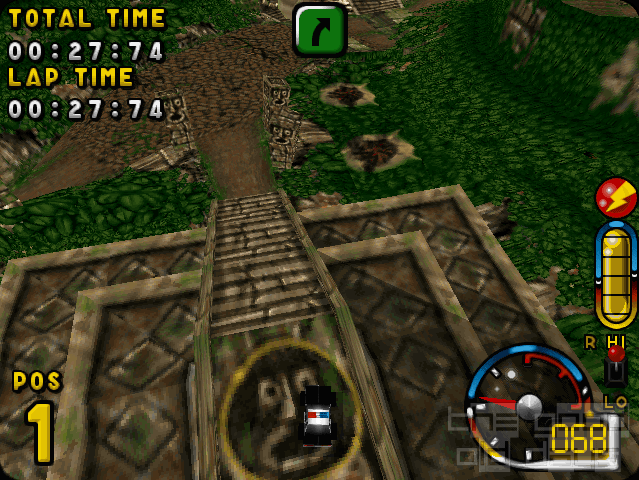