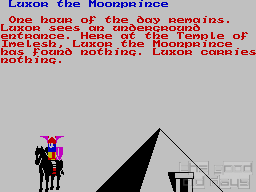 A sequel arriving all too promptly is a sure sign to be cautious. It is true today and it was true 35 years ago, even with shorter development times back then. With Doomdark's Revenge the overall impression isn't so much that it is a sequel already planned when the first one was in the making, but rather that developer Mike Singleton just carried on programming after releasing Lords of Midnight. 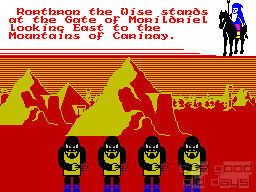 Consequently, at heart, Doomdark's Revenge is just the earlier game all over again. Morkin is noticeably missing from the startup roster of characters, the reason being that he has been "bewitched" by Doomdark's daughter Shareth. Morkin's father Luxor wants him back. Uh-oh, prying a male teenager from an attractive woman who gives him sex… that mission will not be easy!

Principle gameplay has already been described and appreciated, so no need to repeat. On top, inside areas, such as underground dungeons, caverns or the corridors of buildings, have been added. Those work exactly like the overworld and may offer some shortcuts, access to new items or handy escape routes. The main thing is the behaviour of the other lords, however.

Good, neutral or evil, as long as they have not been recruited by the player, they now follow their own agenda. Which, in practice, means that they roam around the map more or less at random patterns. If not random, at least unpredictable. Which, at times, makes it hard to actually locate and recruit them. 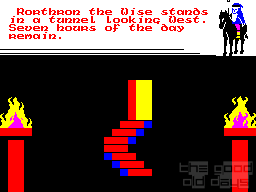 This, together with the new character traits, may be seen as addressing some of the main criticisms levelled against the first part. It certainly does make the previously fairly faceless lords have more character, it is much more realistic than them simply waiting in their towers to be recruited and it even makes the game less predictable.

Though it also makes the game much less plannable. What Singleton overlooked here is that this major new source of randomness weakens the strategic aspect in what was previously a finely balanced gameplay idea. He neglected to mitigate this. For example, the inclusion of a new gameplay mechanic to actually scout for a specific lord's whereabouts without moving one of the main characters around blindly could have helped, but there is no such thing.

So which of the games is preferable? That's really depends on the type of player. For the purely strategical challenge, Lords of Midnight is superior. Doomdark's Revenge scores with a more adventurous feeling and a much more dynamic challenge. If you lose in Midnight, you know you made a mistake. If you lose here, it may just have been bad luck. Though if you win Midnight, you are pretty sure to be able to reproduce that victory, whereas this game remains replayable.