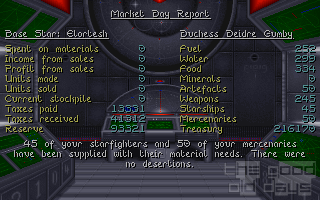 A lot of things went wrong in the development and publication history of Starlord. For instance, it was subject to a fairly huge marketing campaign, with full-page adverts in the style of comic book pages. Just that this marketing campaign ran all through 1993, even though the actual game was delayed by approximately half a year, so it had run out when the actual release occured. The even bigger question, however, would have been why such an inaccessible game was considered worthy of such a large marketing budget anyway, of course… 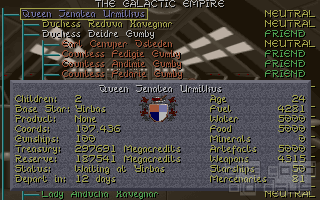 A spider's web of families and allegiances

Those comic book one-pagers, as ugly as they may have been stylistically, actually captured the game's essence not too badly: What we have here is Machiavellian, feudalistic power games. In space. The universe is ruled by a couple of families, interconnected not only through blood ties, but also alliance and allegiance. Kings and queens rule over dukes and duchess', who in turn have earls, lords and ladys beneath them. Above all, there is the emperor. All but the latter have one thing in common: they want to become the new emperor. Even the member of his or her own family.

The way to get there goes through military operation. Assemble a fleet large enough to beat the current emperor on his home world and you dethrone him. While keeping your own home planet well defended, of course. Though if you think you can do it alone, chances are you will fail. Instead, playing your diplomatic cards right, dropping some intrigue, forging (temporary) alliances etc. is key. If you start out on the lowest rank (different starting scenarios can be selected), it is certainly wiser to go for a slow rise in the hierarchy first. As a lord, overthrow an earl. Preferably one who is not well liked among royalty as a whole and therefore cannot activate a lot of allies against you. Think which allies you can draw to your side. And strike when he least expects it.

In gameplay terms, you fly around in your starship, visiting planet after planet. Trading goods to have some income and ensure supply of your own home planet. Strengthening your fleet. Talking to the local rulers to pull them to your side, demanding tribute or attacking them. Which is where the game switches to a battle screen where rudimentary tactical operations are possible. If the Starlord's own ship gets involved, you can even take control yourself in a Wing Commander style action scene. Though both are optional; you may as well just have the battle outcome automatically calculated, which honestly is usually sufficient and disturbs the overall main game flow less. 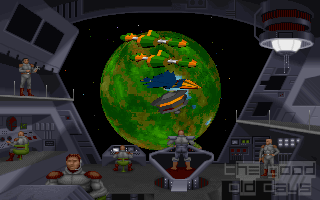 If, in such a battle, you caught an enemy at his or her home base, you can install a member of your own family as new ruler instead. Which makes your family as a whole more powerful. But remember: don't be so naive to actually think you can always trust your kin…

So in spite of the nice, but ultimately forgettable add-ons (such as the tactical or action space battles), Starlord's origin as a play by mail game (run some decades earlier by designer Mike Singleton himself) still shines through. The game is essentially turn-based, with all actors acting at the same time and actions taking their own specific time, so that the overall world state can be simulated continuously. Seemingly arbitrary, restrictive rules, such as certain connections between planets only being accessible to royalty of at least certain rank, make for additional strategic considerations above the typical "send large army south". Random events can spoil the most intricate plan at the last moment or provide a welcome boost at the right time. 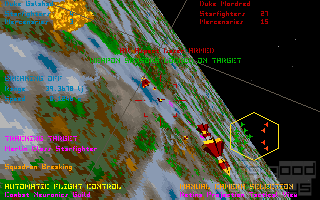 All energy to the lasers!

Graphically, there is light and dark. Some of the screens are decently drawn (especially the events), but many (like the bridge view you spend so much time on) look like straight from the 1980s. The action fights look decent enough, although also not quite up to the standards of the time. One horrible decision taken was to re-use the grotesque, automatically generated faces we already suffered from in Ashes of Empire. This is severe as they really hurt main gameplay. Learning, understanding and intuitively handling the identities of all the other Starlords and their relations would be much easier if they had recognizable looks.

In a similar vein of making fundamentally good things needlessly complicated, the controls are fairly awful. Different keyboard shortcuts apply per screen, which could be efficient it they weren't completely inconsistent. A contextual menu (or sometimes several) can be called using the right mouse button only, but not the keyboard. So moving hands between mouse and keyboard is necessary all too frequently and too many clicks and keys are required to move through too many screens which could provide their information in much more coherent ways. Logically linked information is spread too broadly and unintuitively. For instance, from the star map, it is not possible to jump directly to the profile of the Starlord who rules a certain planet.

To loop back to the initial point: Starlord is anything but a polished game. Which was likely one of the reasons for the delay, though looking at the finally released version, one has to wonder how it all looked and worked (or rather not worked) before. It's a pity, because the underlying game would have deserved some extra polish. It is one of those games with quite a basic mechanic (trading goods, hopping between planets and fighting semi-automated battles) which turns into a complex challenge due to side-conditions; in this case, mainly the strongly interconnected hierarchical and family system. The challenge is there and it can become highly entertaining – though clearly for dedicated players only.