Secret of Mana
for SNES 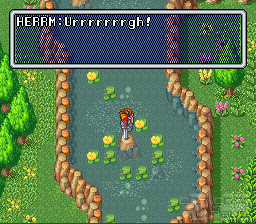 When I started playing this game, I got hooked immediately. It just has...something that makes it addictive. What that is, I can't say.

For its time, it has very good graphics, almost as good as its successor, but it doesn't have great music to go along with it (except for a few major exceptions). The sound effects, however, are good, the combat system is great (Real-Time), with special attacks, throws with the glove weapon, numbers that indicate damage which are bigger if the hit is more severe, critical hits (i.e. Rabite gets whacked) while the enemies can also make criticals, you can move and swing/thrust/hit in all directions, and opponents actually fly back and fall to the ground because of the force of your hits. Plus, it just looks good

Also, the inventory system with the rings is well thought out, though some people might argue that the maximum number of one type of item (four) is too few. (This was fixed in Secret of Mana 2, where you can have 9, plus 99 in your storage, which is inaccessible during combat). Others will argue that that is one of the things which keeps the game interesting.

You always start with the same main character, a human fighter which has the same two helpers, a princess/wizard and a dwarf-like wizard/fighter. That does not sound interesting, but you can choose when you want them to join you (refuse their help), which helps a little.

You can also set their a.i. You can choose to have them close to enemies to give them a good whopper, or far from enemies for ranged weapons. You can set their agression level as well, and (of course) you can set which weapon they should use.

There are eight weapons in the game, but don't be afraid, you can upgrade those weapons eight times per weapon, if you have the proper Weapon Orb and enough cash that is! All characters have weapons they're good with and weapons they're very bad with, but you can train them to use weapons to a certain skill level, plus they learn a special attack with any given weapon per skill level.

The same goes for magic. Finally, a game where you increase in magical strength not by visiting some dusty (cough, cough) library or wizard hold, but a game where practice makes perfect. (Okay, so you still have to find elemental spirits before you can learn magic at all. Details...)

The downside to that is that if you don't use a spell very often, and find out that you need it at a high level somewhere (i.e. Healing Water) you'll have to use it a LOT. Magic is graphically also very good, with a special graphical surprise with most spells once they reach the highest possible level.

The story is quite linear, but some parts can be played in any given order, and it has the occasional plot-twist and unexpected event to keep it interesting.
The down-side to it is that somewhere in the middle it momentarily loses its twists, making it a little too linear, but after that flaw it picks up again.

Since the game manual (yes, I bought this game) also reveals a little about the beginning of the story, so will I:

You and two of your friends have gone to the waterfall near Potos, your home town, despite the fact that your village Elder has forbidden it. You've heard some rumors of ghosts and treasures there.

The three of you are standing on a log, when you slip and fall down from the waterfall. You find that you've fallen into the pool at the bottom of the waterfall, and that your way back to Potos is blocked by some bushes. You look around, and you see a sword in a stone in the middle of the pool. You pull it out to cut the bushes, when a huge flash of light blinds you. When you can look again, a ghost stands in front of you, which murmurs something and vanishes. You go back to Potos, but find a lot of monsters on your way. Once you get back to Potos, everyone is very worried, they have seen a big flash near the waterfall (oops, did I do that?

) and monsters have surrounded the town.

You find out that the sword you pulled out has a legend about it: when it is pulled out of the rock, Potos will be finished... Interested yet? If not, you will be as soon as you try the game. Of course, the game has some bad points as well.

Apart from the music which I mentioned before, your allies' pathfinding is absolutely horrible, and since you can't stray too far from them, it can be quite annoying sometimes. (If they get stuck behind bushes, for instance) Luckily, that doesn't happen too often.

Other minor irritants are the relative linearity of the story, which is interesting the first and second time you play through the game, but doesn't really invite a third re-run, and the inability to change your stats, but that last is more than compensated by the weapon/magic learning.

The game can be played with up to two (and maybe even three, which I haven't tried) players, and will work swell if you and your friend make a good team, but not if you both want to go different ways. There, linearity even helps somewhat

The game difficulty is average, it isn't too hard if you keep training your characters, but if you just run through the game, you will find it next-to-impossible to finish off the final bosses (there are five of those).

On the whole, a good game, quite long and interesting enough to keep you peeled to your screen for even longer each day

A note about the series: On the original box, it says “First game of an all-new series”, which is not entirely true. The game is both a part of the Secret of Mana series (part one in a series of unfortunately only two), but the game is also the second part in the Seiken Densetsu series, which has 4 parts: Final Fantasy (probably), Secret of Mana (SNES), Secret of Mana 2 (SNES) and Legend of Mana for the playstation.

Secret of Mana is just one of those games I can't get enough of.

It has some really nice graphics and music, and the game last hours if not days.

Here's a little more history about Secret of Mana: The first game, Seiken Densetsu for the Gameboy, is known as Final Fantasy Adventure in the US and Mystic Quest in Europe. The name Seiken Densetsu in Japan means Legend of the Holy (Sacred) Sword. There's also a rumour that Seiken Densetsu also meant Adventures of Many Squatty but Powerful Midgets. Thank goodness that they never choose that name for the English translation! The game is said to be released in 2003 on the Gameboy Advance, so keep your eyes peeled for any information on it.

The second game, Seiken Densetsu 2 for the SNES, is known in both the US and Europe as Secret of Mana. This game, although being the second in the Seiken Densetsu quadrilogy to be released, is a prequel to the Gameboy version. If you play SOM first and then FFA/MQ second you'll see that in FFA/MQ they speak of events from SOM in past tense. The third game, Seiken Densetsu 3 for the Super Famicon was only ever released in Japan. European and English translations of the rom have been made for the benefit of the US and European SOM fans and has been known in the US and Europe as Secret of Mana 2. Despite the many pleas from the US SOM fans to release an English translation of the game in the US, Square provided a game called Secret of Evermore instead which is vaguely similar to SOM. The fourth game in the series, Seiken Densetsu 4 for the playstation, was only ever released in Japan and the US as Legend of Mana. The game is based after the death of the Mana Tree (which presumably happens in Seiken Densetsu 3.) Unlike the other games, this does not require the hero to go in search of seeds, stones and swords, or involve rival characters trying to compete against the hero.
andre:
i have known about this game and it's succesors for quite some time and i would like to add that the name for its predeccesor is final fantasy adventure for gameboy not final fantasy 1
Waldemar Merger:
The game is very cool and i will it downloading. Waldemar Merger Germany.
Johann67:
Feel free to share anything about Secret of Mana (1994) here!
[Reply] 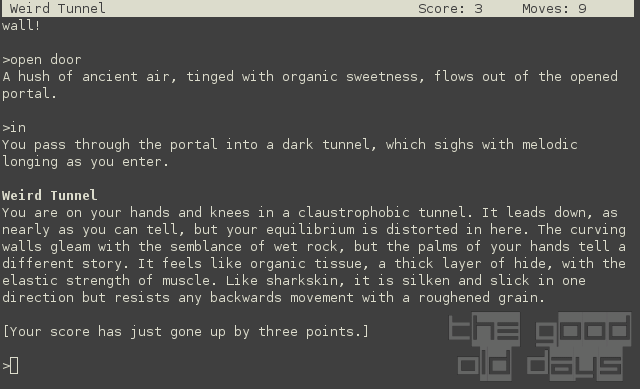