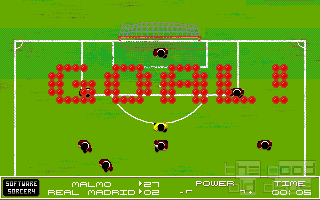 This is one of those games which illustrate how much the world has changed in the last 30 years. How much people and their habits have changed. I got European Soccer Challenge as a gift. There were two ways it could go with gift-givers of an older generation when it came to computer games. First, clearly preferred by the potential recipients, they could be asked for a wish list. Second, something would just be bought. Based on… game theme and cover presumably. So me and my brothers found ourselves the lucky owners of a copy of this game.

Almost needless to say, it is horrible. Simplistic graphics and almost non-existent sound aside, playability doesn't score, either. Not at all. Playing against the computer, on lower difficulty levels, all you have to do is shoot with full power from an easily identified spot and you'll always reliably score. On higher difficulty levels, the opponents will usually prevent that by tackling your player before he can get the shooting power fully loaded. Don't sweat it, though, because there is an alternative. 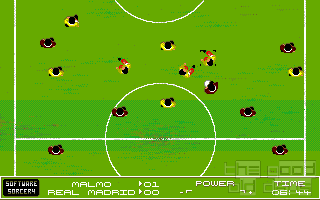 No, they are not bleeding… it's their legs!

Although the ball is actually sticky on the players' feet, you can avoid being tackled by simply not being in possession. So what you do is always kick the ball an inch in front of you, run after it, kick it again on contact and so on. Making you immune to any attacks other than from the goalkeeper. Even him only if he happens to stand exactly in your way, because otherwise, he is totally useless. Oh, and don't get your hopes up for multiplayer, because the same tactic works there, too. I.e. it will just be a question of being unlucky once or twice which will determine the match's outcome. No other game modes exist.

So far, so regular. There have always been bad games and there will always be people who don't follow even the most basic research rules before buying. What is really unbelievable from today's point of view is how much time we spent on this game! Nowadays, such a turd would be tried for 30 seconds and then discarded. At worst. Back then, we did play it. Maybe not as much as some other games, but repeatedly – even though even then, we joked among ourselves how bad this game was. We just still had a longer attention span, a higher threshold for boredom/pain and definitely – remember, even to copy games, we had to buy blank floppy disks – a lot less choice. 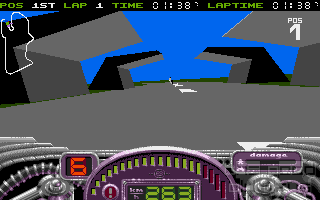