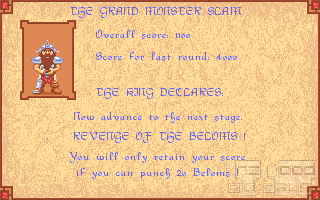 Really simplistic games can nevertheless be totally addictive. In fact, among the most addictive games ever released, you will especially find a lot of simplistic ones. Accessibility plays a major role here. If you've got a strong central game mechanic, what can go wrong? In fact, Grand Monster Slam doesn't stop there. It takes its game mechanic, which has actually been “inspired” by another game completely unknown to western audiences, to a new level through imaginative design.

So what is it really all about? It's a sports game set in a fantasy world. The reigning castes, made of dwarves, trolls, orcs etc., are holding a ball game tournament. Where the ball's role is actually taken by animate beings, so-called Beloms. These Beloms, consisting basically only of a head, have the unfortunate task of waiting to be kicked by the star competitors who stand on opposite sides of the playing field. The player who manages to get all Beloms to the opposite side and then starts his home run wins.

Would be easy if the opposing player didn't try the same. Assuming equal speed, the amount of Beloms on each player's side should remain constant over time, because just as many of them can be kicked over as come in from there. The way to win is to aim right. Beloms can't just be kicked at random, but at arbitrary left-right angles and with selectable power. So either you can try kicking Beloms all the way to the side so that the opponent has to run. Or you aim directly at him, trying to temporarily knock him down. While, remember, the opponent will try the same, so you have to keep moving to avoid his shots.

Some simple rules spice things up. Shooting a Belom out of bounds, the other player receives a sort of penalty, where he can shoot a duck which the other player has to try catching. In higher leagues, the playing fields may contain obstacles. Between the main games, two alternating mini-games have to be mastered for bonus points or progress. All nice, but none of this actually makes the game.

It is really the basic idea which shines here. That and the deliciously weird set design, the small animations even in the spectator ranks, the nice music… Good work! 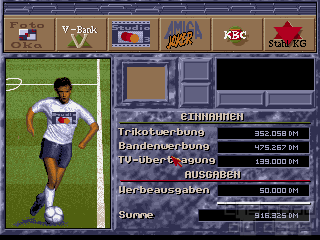