Else we get mad!
for Amiga (OCS/ECS) 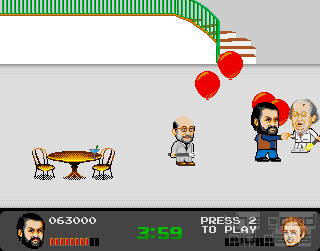 When the Amiga was unveiled to the general public, the careers of Bud Spencer and Terence Hill were already on a clear downwards slope. Up until the early 1980s, their films had topped the European cinema charts regularly. Even today, they are quite present on TV, each time entertaining a returning audience. Their big run spanned more than a dozen films within just roughly 15 years. It isn't surprising that things became a little formulaic over time. One mainstay graced all those films in any case: the brawls! 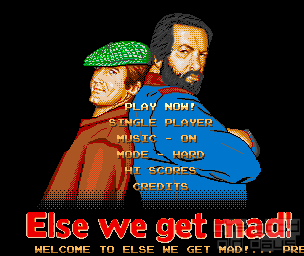 Those are what we find in the new Amiga game Else we get mad!. A title which sounds appropriately badly translated. The game's title screen shows the inspiration in the movie poster of …altrimenti ci arrabiamo!, which roughly translates to the game's title, but which was actually marketed as Watch Out, We're Mad! in English-speaking countries. Finishing the game, the player even learns that it was all about getting back the red beach buggy from the gang, as in the film.

Gameplay concerns two unnamed sprites which resemble the idols of our youth quite closely beating their way through a handful of levels Double Dragon style. Where, of course, they meet the same shitfaces again and again who are just asking for a beating.

Graphically, the game is quite inconsistent. The sprites' heads are modelled fairly well, but their bodies are somewhat disappointing and the level background even look like the first attempts at pixel art made by a ten-year-old. Gradually progressing further into the game, it isn't so distracting anymore. At least some of the background objects can even be destroyed and pushed around with the protagonists' superpowers. 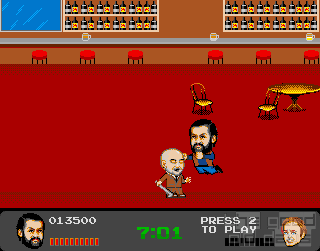 The first hits score well with the player, but then, a large gameplay gap becomes apparent: the iconic fighting techniques of Mr. Pedersoli and Girotti simply don't exist in-game! “Buddy” cannot perform his hammer fist from above and neither can his partner distribute face slaps at record speed. Instead, the latter is able to perform a dropkick. A move likely never seen once in any film.

In addition, at least to a German audience, where the two were most successful internationally, Rainer Brandt's share of their popularity remains totally unaccounted for. Brandt was responsible for the German dubbing of the films. Instead of simply translating them, however, he actually rewrote much of the dialogue, even added new lines when characters could only be seen from the back, for example. Through his work, he defined some of the colourful language which is still in use in our generation. Lacking any dialogue, none of this humour can be found in the game.

The game has the basics of a short beat 'em up all right. Getting through to the ending takes no extra, strong motivational pushes. Fine tuning, however, is lacking. That individual character which set the Spencer-Hill films apart from the rest of the brawler comedies released in that era. Else we get mad! is fun, but in the same way as those weaker films which are somewhat entertaining while they last and when viewed in company, but which are forgotten right after the credits rolled. It is a little bit like the late arrival Troublemakers: it doesn't feel quite as we remembered it or maybe wanted to remember it warmly.

Moebius:
Quote:
The sprites' heads are modelled fairly well, but their bodies are somewhat disappointing and the level background even look like the first attempts at pixel art made by a ten-year-old.

Because faces are apparently rotoscoped and the rest was drawn entirely by hand, which isn't all that bad. I'm saying this as an amateur pixel artist. It's not as easy as it seems, and just that tiny knuckle alone could take you forever to nail the way it is. By the way, surprised to see an Amiga game from 2017. I knew there is a large C64 community out there, but this is something new to me.

Mr Creosote:
Feel free to share anything about Else we get mad! (2017) here!
[Reply] 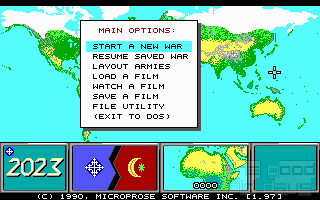