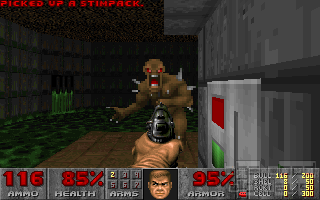 When Doom was released in 1993, I wasn't even close to being born. However, now that I'm 18 years old, I've grown more and more interested in old technology and therefore also old games. One of the first games I really wanted to play was Doom, because I've heard so many great things of this game.

When i started playing it on my raspberry pi some time ago, I was instantly hooked. Doom is a fast paced first person shooter set on Mars. The story isn't very fleshed out. One of the creators of Doom explained why. He said that the story in a game can be compared to that of an “adult video”. It's expected to be there, but it isn't important. The story goes something like this: On Phobos, one of the moons of Mars. Scientists are experimenting with teleportation. During one of these experiments, a portal to hell is accidentally opened. Through this portal, demons come to mars and “infest” the planet. It is up to you, the nameless space marine, to kill all of these demons and close the portal to hell. The game devs have given you some great tools to do this. The super shotgun, plasma gun and the BFG to name a few.

Even though I've never tried it, I've read that multiplayer is also present in Doom, with up to two players online and up to four players on a local network. It is quite the hassle though.

Doom has most definitely become one of the most popular games, because at some point, it was installed on more computers than even Windows 95. Doom has been ported to over 20 computers and consoles and it has almost become a challenge to get it to run on as many devices as possible. A car, a piano and a printer to name a few.

Overall, Doom is a great game, with expertly designed levels, weapons and enemies. The movement is smooth and installing this game on an old computer is an absolute joy. The only reason I'm giving this game 5 stars and not 6 is because of the controls with a computer mouse. Even though moving the mouse from side to side causes your character to look from side to side, like it should be, moving the mouse forward and backwards causes your character to walk forward and backwards. I think that is incredibly annoying and quite unplayable indeed, however this simply comes down to personal preference, anyone else playing this game might absolutely love using this mode. Luckily there is an option to play Doom with keyboard only.

Nukkus:
I still don;t think it gets any better than Doom. From the time I first played the shareware (it was released when I was 9) to when I finally got the registered version by saving up shoveling snow, I was hooked.
nobleEightfold:
This game is still absolutely a blast to play. For me, it's worth setting up era-specific hardware just to play this game in its original form.
bulvag:
The game of my youth
Magmon:
Feel free to share anything about Doom (1994) here!
[Reply] 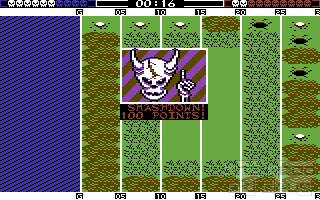