Although there were quite a lot “simulations” of real team sports like soccer in the Amiga's days, it seemed to be nearly impossible to port such tactical games with so many players to the computer. Most companies simply didn't care and published almost unplayable sports games. But there were also the smart ones like the Bitmap Brothers who thought a bit about different concepts! The result was Speedball, the summit of team sports games.

In the future, this new sport attracts the masses! Two teams with four players and a goalkeeper each play against each other. The team which scores most goals wins. The ball can be carried as long and far as possible, but rude ways to interrupt the way to the goal are also allowed.
The playing field also has some extras like a ball-teleporter and things that throw the ball back once it touches them. So every arena is unique!

Because there are only so few players and because the arenas aren't too big, it's always possible to keep the grasp of everything. Even clever tactics can and should be used!

Between the games, you can spend the money you collected during the game (coins just appear on the ground sometimes) for upgrades of your team or illegal stuff like bribing an official. No risk though - nobody ever notices!

Overall a genious game - graphics and sound are just... WOAH! And the contents are also great - many options (league, knock-out,...), a quick fun game! 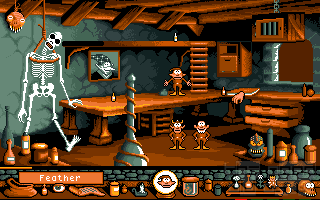