Secret of Mana 2
for SNES 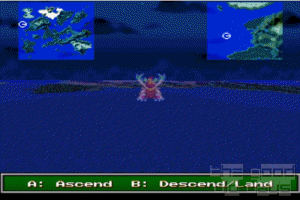 This is, in my opinion, THE best game ever made for the SNES. It has almost everything:
-A good storyline, with 6 different beginnings (one for each of the 6 characters) and 3 different final areas. It will keep you in front of your screen for many hours, with the occasional unexpected event, and then, just when you think you've almost finished the game, you find out that you're only at about one third of the game! (Yep, it's WAAAAY longer than Secret of Mana 1) and that's just with one party, with 119 other possible parties still waiting to be tried, or, if you have too little time for that, 2 other game endings...
I can't tell you how the game begins, because it's different for every main character.
-Six different characters:
Angela, a wizard-in-training, and also the princess of the Magic Kingdom, Altena.
Carlie, the granddaughter of a priest, and a priest-like type herself,
Duran, the best sword-fighter of Forcena,
Hawk, a member of the Navarre Thieves Guild,

Kevin, a beast-man who fights with his hands and turns into a werewolf at night-time,
and Lise, an amazon warrior and princess from the Wind Kingdom, Rolante.
All of these characters start out that way, anyway...
You can have your characters change their classes twice per character. For instance, Angela starts as a Magician, then, if you go with the Light side for your first class change, she becomes a Sorceress, who can evolve into either a Grand Divina (go with Light again) or an Arch Mage(first the Light side, then the Dark). If she goes with the Dark side, she becomes a Delvar, then either a Rune Master(Dark Light) or a Magus(Dark Dark).
Each has different powers/spells/attacks.
Also, each time you go up a level, you can add a point to one of 6 basic stats for your character. You almost can't get any more customizable than that...
Plus, you get to use 3 of these characters in a team. (like in the original Secret of Mana) Your main character determines your story-line.
-A large world, with interesting features like day/night only creatures, or the 7 days of the week which have some effect on the game, (inns are free on Mana Holy Day, some monsters are stronger on one day and weaker on another, etc.)
-Very good graphics (just look at the screen shots) you can actually see night change to day and vice versa.

Also, the graphics for spells and class changes look sublime. Not to mention the bosses(or most of them anyway

)
Some of the things do have a tendency to look like Secret of Mana 1 but quite a lot are new and none of the bosses have been recycled from SoM 1. Also, they haven't used the same monster templates as often as they did in SoM 1. (Not 3 wolf-like enemies in the same tower)
-Monsters that grow in level and gain new tricks at higher levels just like you do.
-Seeds that you can plant at an inn and grow into items.
-Many more things that you'll come across, like a ...
Nope, I won't spoil the fun any further. You'll have to find those things for yourself.
BAD SIDE:
The only real downside is the music, which seems to have developed a scratch (or is that some Japanese instrument?). But that doesn't cause much trouble.
I've thought quite long about possible down-sides, but that's really the only one I could find.

HISTORY:
SoM 2 is also called Seiken Densetsu 3. The Seiken Densetsu series seems to go cris-cross through several series and consoles. About the first Seiken is some debate, some say that it's Final Fantasy 1, others name different games. It is accepted that Secret of Mana is Seiken 2, and that SoM 2 is Seiken 3. Seiken # 4 (currently the last one) seems to be the game Legend of Mana (for the Playstation). Confusing...
ABOUT THE ROM:
This ROM has been translated from Japanese (since the game was never released outside of Japan, extremely stupid marketing move btw) but the only things you might notice about that is the title (Seiken isn't English

) and the “bad checksum” tag on SNES9X. (without any effect, it seems to do that with all translated ROMs) I haven't seen a new SNES game for about 3 years now, so I doubt that it will ever be released outside of Japan.
Well, nothing more for me to say then: Enjoy the game! I hope you like it as much as I do.

Pietoro:
Secret of Mana was the first RPG I ever played, it hooked me for life.

SD2 was more of the same, with improvements. I liked how different character choices affected the difficulty of the game, and the story changed too.
Wandrell:

And if someone liked this game should play FF: Crystal Chronicles in a Gamecube. It requires a GBA, and connection cable, for each player, but it really uses it.

The game looks and plays like a Seiken Densetsu. The Final Fantasy of the name, and monsters from those games, where added obviously for publicity, nothing else as it is at real time, withouth the agobiating fights of the FF games.

The Seiken Densetsu (Legend of Mana is what it means) series are as follow:

The first was published in Gameboy, and sometimes is called Final Fantasy Legends.

The second and the third are for SNES. They are the ones on the page.

The fourth, the best of the series, but that also can be horribly complicated if you want to build or raise well your skills and the ones of your pet, is for PSX. Translated as Legend of Mana.

The fifth is just a remake of the first, for GBA. Translated as Sword of Mana.

And they are going to make one, or more, for the new consoles. Probably at least for DS and PSP.

BeearMaster:
Great game! I haven't actually tried this rom but the one i used to play with before never had the glitch Melanie mentioned. Neither did it have the sound problem Johann67 mentioned in his review. This is my favorite RPG of all time. Final Fantasy X comes in 2nd place.
asdv:
snes games one call
sascha:
cool
Melanie Hoyle:

It is such a shame this game was never released in the US or Europe, but the rom patches have brought some relief to the suffering US and European SOM fans.

I've heard that there is a "bad checksum" on the rom and this seems to effect some things in the game, for example it has a corrupted save state which can prevent you from saving, and Duran can't change class.

But still, despite its glitches, this game is absolutely excellent and I do recommend it.

If you must save then I suggest using the emulators' save slots rather than the roms' save slots. 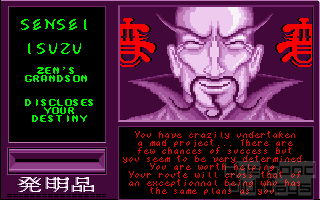