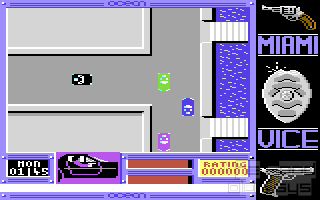 Oh, no! Yet another licensed Ocean title? Granted, you shouldn't get your hopes up too far. Nevertheless, Miami Vice really isn't all that terrible as it is often said to be and certainly, it is memorable and unique!

Thematically, the game has the two protagonists finally trying to get a real lead on drug overlord Mr J. Rumor has it that he will be personally involved in a large deal soon. Though where and when exactly will it take place? It is the player's task to find out and they have to begin at the very bottom of the information chain. They have leads on some small-time deals. Catching those crooks may reveal further information on bigger ones until finally, the big fish can be identified.

Gameplay is split into two sections. First is driving around the city to get to the right locations at the right time and, if necessary, to chase escaping criminals. Including shooting out of the car window, of course. Second, arriving at the locations, you enter buildings, crash through doors, weapon always ready, to book dealers.

The game's fairly open-ended nature is actually quite appealing. The city, although not huge, feels somewhat alive and some planning is required to balance the most useful activities. The streets are mostly occupied by normal civilians, not just police and gangsters. Sure, these cars appear and disappear completely at random. They don't even have any global tracking state; as soon as they leave the visible screen, they are gone forever. Nevertheless, this is an understandable limitation.

Screen layout makes a lot of sense, too. The main part of the window is reserved for the overhead view of your car driving around the streets. Below, there is some status information, like health and shooting angle as well as a message ticker providing the results of interrogations (would be nice if this information could be recalled in-game somehow). Graphics are acceptable, but not spectacular. Joystick controls take some getting used to as both the single fire button and the directions are overloaded with contextual functions, but don't work all that badly.

One major obstacle is the non-existent car artificial intelligence coupled with the design sin to have the player's car explode at the slightest touch of… anything. While hitting the pavement or a shrubbery can be avoided after some training, the civilian cars, whose existence I just praised some sentences earlier, drive in total ignorance of the player's existence. They will happily crash into you from behind, ram you from the front with no attempt at breaking or avoidance. Lacking scrolling, driving close to the screen border is particularly dangerous (but unavoidable) as a randomly generated car may just appear directly next to you.

This, together with the game being unplayable without the manual (it contains time and place of the first deals), makes the game the target of vicious attacks and the butt of countless jokes today. It is understandable to a large degree. Nevertheless, looking at its core gameplay mechanic, it is actually quite ingenious and fairly balanced at it. Execution is most certainly lacking, yet it is somewhat playable for the patient. Be honest: would you have preferred yet another generic jump'n'run? Didn't think so. 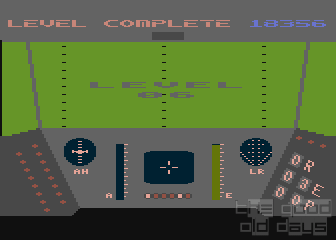