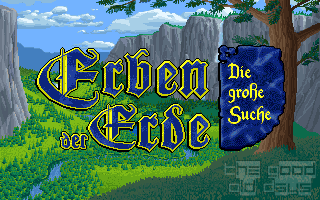 The fable genre somehow always feels old-fashioned and preachy. Not the best foundation to build a modern-day game on, one may think. Though according to someone at Wikipedia, Inherit the Earth at least appealed to a specifically weird audience with this approach. Let's try to put attraction or revulsion towards anthropomorphic animals aside for the sake of this review.

The game sets itself on a post-apocalyptic Earth. Humans have disappeared and the world is not inhabited by walking, talking animals, using technology approximately on the level of the human middle ages. Those, having been “taught” and probably created by humans originally, still worship their creators, although their memory is only kept alive through legends. This backstory is first put aside in favour of a small criminal case: in the middle of a fair, a mystical orb (an artifact of the humans) has been stolen. Reportedly by a fox, so Rif is the logical prime suspect. He is given a chance to prove his innocence at least, though in his investigations, he is supervised by elk Eeah and wild boar Okk.

Thematically, the typical racism issues are touched upon (the different animals not trusting one another…) without ever making any interesting point about it. In genre tradition, characterization is almost exclusively based on species (the boars are primitive brutes, the elks educated, but elitist etc.), making the protagonists and also everyone they meet very bland. Thankfully, it becomes more interesting once the player reaches the ruins of human civilization. Here, allusions concerning the humans' fate are dropped with some subtlety, as it is mostly done implicitly. An interesting motif in that game phase is that the player in front of the screen can actually read the signs and artifacts remaining much better than the protagonists, leading to a knowledge gap which is the reverse of the usual situation in such narratives.

Problem is that getting there takes a lot of time. The orb's theft isn't a horrible hook and the investigations do include some classic crime scene elements. Mostly, puzzles come down to fetch quests, however. Made worse due to extensively and unnecessarily long distances which the player needs to cover repeatedly, including numerous maze-like regions. The isometric graphical perspective (absurdly combined with flat characters viewed from the side) makes matters worse, hindering orientation significantly.

Weak characters abound, there should be little hope for entertaining dialogue and indeed this concern is valid, and even in more ways than imagined. Half of the time, it is the expected super-serious tone, with everybody speaking in an unbelievably stilted manner as common in today's cheap “high fantasy”. But then, even though the intro clearly states that the animals don't possess the “secret of cheerfulness” (for whatever reason), cheap, corny one-liners are also flying around almost immediately. A pointless, out of context Monty Python reference at the beginning being the relative highlight still – the player is expected to swallow unbelievably stupid groaners in a plot which takes itself dead seriously otherwise. Truly an strange mixture.

Above the solid enough premise of indirectly telling a tale of the disappeared humans (which remains without true payoff in the end), Inherit the Earth doesn't have a lot going for it. On counts of game design, it is rather basic in its best moments and becomes plainly annoying all too frequently. Explicit plot and characters don't save anything, either. Inexplicable and sudden tone shifts throw the player out of the tiny bit of immersion the narrative may otherwise have provided. Unless talking, clothed animals by themselves constitute a value to you, you should consider skipping this one. 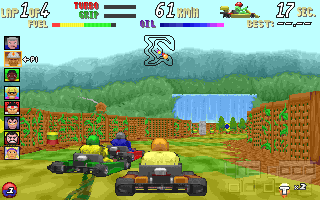