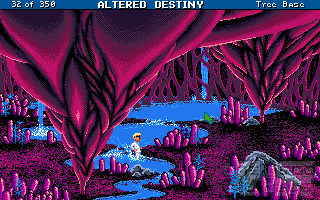 Have you ever wanted to play a 1980s/early 1990s yuppie? No, this is not Jones in the Fast Lane, even if certain parallels to Sierra cannot be denied. Accolade had entered the Adventure game market relatively late with a Sierra-like parser/graphics hybrid engine which already appeared anachronistic when it was first applied and even Sierra itself was already moving away from such a model at the time. Altered Destiny retains this clumsy interface which never made any sense, but at least the predominance of textual storytelling makes some sense in this case insofar that they acquired the talents of an Infocom veteran to write the game for them: Michael Berlyn (Infidel, Suspended).

The plot concerns said yuppie being sucked into an alternate dimension through his television where he is greeted by a basically powerful, but unfortunately currently imprisoned being. The intention had been to summon a mighty warrior, but now our protagonist will have to do. The task is no less than saving the world.

So, as in Sierra games of the 1980s, you control your character with the cursor keys plus parser commands which can be entered as free text. One major issue with this is that the game expects the player to recognise things graphically depicted and address them with a name the game expects (an issue going back to the earliest Sierra games). Other irritations, such as the text input box overlaying the main graphics, but feedback nevertheless being location sensitive, and (in spite of the input box freezing the action) the system being especially awkward for timing based puzzles, also are all too familiar. The Sierra design school appears to have been followed as well, with instant death being a constant threat.

The alternative mouse interface for player movement at least mitigates some of the most annoying issues, which you'll realize right on the second screen trying to walk down a curved staircase, which – surprisingly enough – is a piece of cake due to a usable pathfinding algorithm (unlike King's Quest IV). Quite sad if absence of negatives has to count as a quality to have any positive notions at all. The port isn't exactly stellar, either. The low number of colours doesn't do the sometimes exquisit set designs justice. Even worse, everything is really slow: the text input box takes a second to appear, characters first move their mouths and only then the text of what they say pops up etc.

Yet, even with clearly sub-par technology being at work here, Altered Destiny has a quality which transcends such concerns at least to a certain degree. The worldbuilding is fairly strong and avoids the glaring clichés and kitsch which make Sierra games such a bland affair. Sure, at times, it may try a little too hard and the weirdness may become a little exerted, though generally it works. This fascination, the curiosity factor (even if none of it actually means anything) will keep you playing in spite of technical annoyances and limitations. Whether it will last all the way, you will have to find out for yourself. 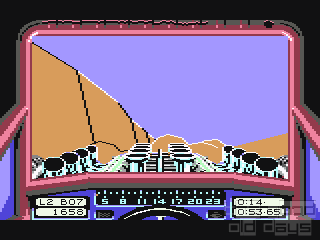