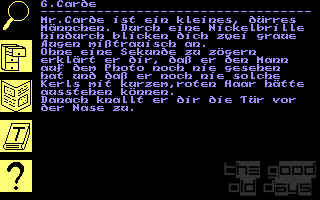 Scotland Yard was a big hit on the 1980s board game market. Absolutely everyone was hunting Mister X and got to know London in the process (at least superficially). Though in spite of the revealing font used on the title, this game has basically nothing in common with the much more famous Scotland Yard. Nevertheless, it is familiar from the board game world. Just that it is called Sherlock Holmes: Consulting Detective originally. Seems someone neglected to negotiate licencing terms. The diogenes club makes an appearance nevertheless.

The player has the choice of a dozen criminal cases including a short tutorial. Instead of impersonating a master detective, you find yourself in the shoes of a nameless junior inspector of the British police. Who nevertheless takes advantage of the same "consulting detective" methods.

Meaning: as soon as you receive your case, you comb through your address book for possible witnesses or people otherwise involved to interview them. Or you can research people's criminal history in their files. Or you can consult today's newspaper for clues. Or tap into information sources of other formal or less formal nature. Until you are confident to have learned enough and present the solution to your superior.

Which works in the way of being asked specific questions which you have to answer through text input (text being the backbone of the whole game everywhere). Unfortunately, there is no way to guess in advance what you will be asked about. On top, the parser is of course unforgiving about spelling mistakes or use of synonyms. So this part of the game hardly works perfectly and what may be even less satisfying is that the game never asks for any proof: your claims alone are apparently sufficient to ensure conviction. Unless Scotland Yard's goal is really only to publish the truth without further legal consequences for the wrongdoer.

Intuitive controls and plainly written prose help the player focus on the core mystery. The devil's usually in the details; the game expects its player to read carefully and catch on to seemingly casually dropped sidenotes. Although the path towards the solution implies a recursive stream of interviews (the first batch of witnesses point towards further names etc.), the game doesn't keep track of the player's real state. Meaning it can happen that completely by chance, you stumble over a vital piece of information which hasn't been motivated or even doesn't make much sense yet.

Though it seems that both gameplay issues (presentation of the player solution, management of player information state) are fundamentally conceptual, because when the same game was translated into an official computer game some years later, both crutches could be found again exactly in the same way. Presentation may have been given stronger focus with filed video clips, but on the other hand, the case editor present in this older game was nowhere to be found. Sure, not that the latter really is that useful these days (more of a curiosity, like Electronic Arts' Make your own Murder Party), but a nice add-on nevertheless.