Shard of Inovar
for C64 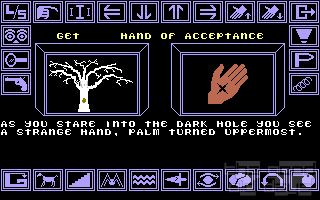 Simple games often also use simple graphics lead by practical means. The game is then carried by the solid gameplay foundation or – in the adventure genre – by a good plot. Shard of Inovar's plot, in any case, isn't a tired one at all. Just like the controls. Small pictograms on the sides of the screen trigger certain actions. Judged by the number of icons, the game is actually rather short and some symbols, like for example “swim”, are never required to solve the game. Invoke, on the other hand, conjuring up a magic spell or following through a ritual, is used quite frequently. Yes, you guessed right: this takes place in the fantasy genre. Authors Les Hogarth and Clive Wilson were leading figures at Mastertronic at the time and they published this text adventure as part of a trilogy together with VENOM and KOBYASHI NARU also on other platforms than the C64. My quality expectations are somewhat high as I first dive in.

In this case, however, you should first dive into the backstory laid out in the manual. Apparently, this was the then common stand-in of today's video-based intros. This short introduction familiarizes the player with the pleasant-sounding names of this primal world's inhabitants. The elven folk of the Eharin with their leader Sunquat and their dark adversaries of the Singard lead by Arthemin who also happened to be former master fo our protagonist Varwield, but became evil out of pure bitterness. The one chance to secure the life-supporting and powerful rituals of our master for good again is the Shard of Inovar. It is only a small fragment of the star-shaped elven stone owned by the Eharin whose power provides safety from marauding wild animals and, when needed, ensures rain on long droughts.

In the left-hand part, a small window contains a graphical representation of the current location and the right-hand window contains the collected objects. What is even more important is the scrolling text above the windows which permanently displays the directions available and – combined with certain icons on the border – the selected inventory items or names from the location description. This system does not require text input. Nevertheless, the choice of options is vast. In my view, this is a clever predecessor of classic icon-based controls which uses selectable words in the location description instead of clickable graphical objects in the backdrop. Progress through the game is rather straightforward. Even the obligatory maze is comparatively small and the distance from one end of the game world to the other is only a few clicks away. The original icon Mount is noteworthy in this respect as this allows to ride goat-like creatures called Laryx to cross larger distances.

The game as a whole lives off its epic scenario which unfolds its intended atmosphere through the well-written English prose. The puzzles integrate well into this frame and force the player to pick up the thread of handling cursed artifacts like others do lock and key. The graphics in their tiny window are barebone practical, but not tasteless. Throughout the game, only one single creature is ever shown, the other images are just about temples and landscapes around the large plains of Adklaart Mire. Nevertheless, the conclusive climax makes the game surprisingly varied in retrospect. The pointed style of making the game appear epic certainly is a matter of taste. Especially since the presentation isn't exactly epic by today's standards. Shard of Inovar, with its sure eye on details and language on the part of the maters, turned into a memorable trip for me, comparable to reading an (old) interactive comics.

Moebius:
Feel free to share anything about Shard of Inovar (1987) here!
[Reply] 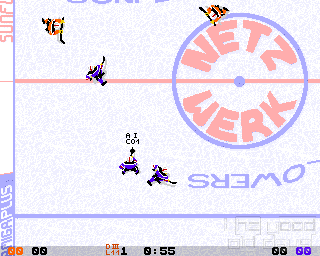