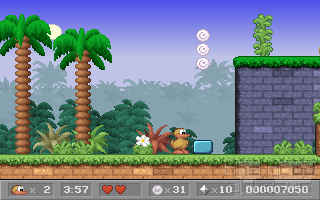 Charlie de Eend is a Dutch side scrolling platformer, which was probably inspired by the Mario games. Even though the game is created for children, it's surprisingly challenging, which makes the game quite fun.

The graphics look great and they give the game a very upbeat atmosphere. This is the shareware version of the game, containing only a third of the total amount of levels.

There is a nice variety of enemies and even a boss to defeat. Most of the enemies can be defeated by jumping on them, but there are also enemies with spikes, which you should avoid jumping on, because they will cost you a life.

There is one power up to help you on your journey. This is the shield power up, which makes you invulnerable to enemies. Charlie de Eend is overall a fun game to play.

I've only played it with the PC Speaker, because I don't have a Soundblaster or an Adlib card, but nonetheless even the PC Speaker sounds are enjoyable.

This game is also available on steam and on mobile, only on android though, so apple users are left behind this time.

The game is made for Windows 95, but run it in Windows 2000 and it works without any issues. The game appears to run in a DOS window, so it should also work in earlier versions of windows. I have not tried that yet though and I'd love to know if it actually works.

There is also a sequel to this game, simply called Charlie de Eend 2. Dutch people are very creative when it comes to naming things. If you get the opportunity to play this game, I would really recommend doing it, because it's overall a fun game with the capability to kill some time in a fun way.

I never heard of it before, but I gave it a spin using dosbox on my Windows 10 box.
It ran perfectly, even with Roland sounds. However, I doubt it's a game us Dutchies should be proud of