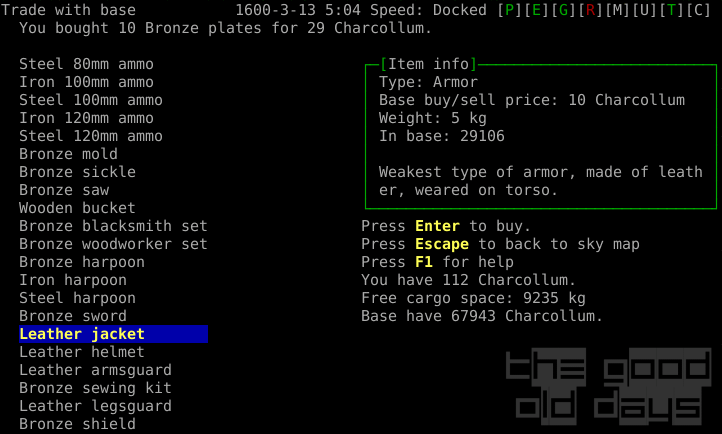 Steampunk. What started as an original and not entirely unfascinating thought experiment has by now been reduced to stupid costumes primarily consisting of top hat plus welding goggles. It's hard to imagine why a new game would jump on that sad train in 2016. What is even more surprising, however, is that this game then actually doesn't use its self-proclaimed theme after all. Mysterious.

Steam Sky is probably best described as a turn-based Elite. Not that it takes place in space. The player navigates between floating air-bases. In a ship which is probably running on steam and consists of parts whose names don't give the impression that such weight could ever fly. Though that is the whole idea of steampunk, isn't it? That's it thematically, though.

You fly around, trading goods between bases. Logical rules apply, such as ideally buying ores on mining planets and selling them at refineries while delivering food to both of them. The world, being randomly generated, has to be explored first or the location of further bases can be inquired about. Money is used to pay the crew, train those members so that they become better pilots, gunners etc., to hire new ones or to improve the ship itself with superior equipment. Missions, typically dealing with exploration or headhunting, generate further income and also improve the player's standing on specific bases. Unfriendly sky encounters are dealt with in rather abstract fashion by just setting basic strategy: get close, keep distance, aim at specific parts of the enemy ship or spam them with ammunition? Try to escape? 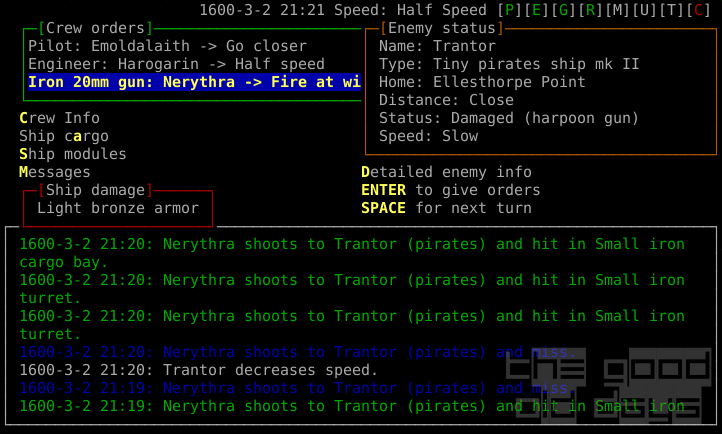 It's all pretty nice, but then, the thematic aspect keeps showing its ugly head. Or rather not. Whether you fly around a sky or space, whether it is floating bases or space stations doesn't make the tiniest bit of a difference. The fights don't show any specific tactical options. Goods are quite generic and could as well appear in a space-based game just the same. Player standing aside (bases can be happy or unhappy with the actions of the player, at some point not allowing him to land anymore), the bases show little individuality.

One could really ask why the author tried establishing his game as belonging to the steampunk genre, showing little of its defining aspects and using even fewer. In the reviewed state of development (version 2.0.3), the world and the player's interaction with it feel rather mechanical. There seems to be no backstory to discover; e.g. why has the world moved to these floating bases? What happened on the planet surface? Why are the bases' locations unknown? How can ores be mined on a base in the sky? There could be so much lore to feed the world with, but none is to be found. Likewise, if we assume that the “airships” are rather hulking structures like zeppelins (lacking graphics, it is hard to tell), why isn't this reflected in the battles? Lack of maneuverability or direct line of sight could play large roles, but don't.

The basic groundwork for Steam Sky to become really excellent has been laid. Taking the basic Elite formula to a turn-based fashion makes much more sense mechanically than one may think; this indeed differentiates it quite a bit from the original, providing a different sort of feeling and challenge. What is really needed at this point to appeal to more than just die-hard fans is to flesh out its theme. To make its world come alive, feel alive. What players expect in this genre is to visit greasy bars on the bases, listen to gossip and then wonder if what they heard is just unrealiable ramblings of a failed drunkard, if this fantastic revelation really contains a grain of truth or if it will be possible to explore this bit of world history a bit more later on. Whether it all leads anywhere could even be of little consequence; it would give a purpose to travel from base to base beyond making more money. 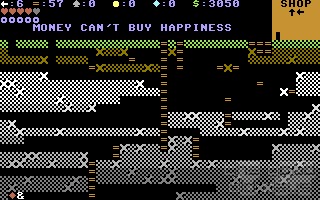