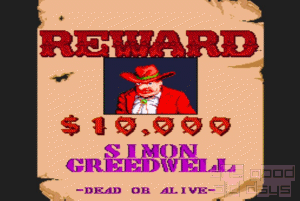 You are one of four bounty hunters in the old Wild West, hoping to earn a decent living by shootin' some bad guys. Well, you're going to get your chance...

This game is a conversion from an old arcade game re-done for the SNES. That more or less says everything about the good and bad sides:

BAD:
Difficulty is more or less only based on reflexes
The game isn't too long
Very stereo-type game (but hey, isn't that the way we like it?)

The game does have the realistic factor that you die if you get shot once, (not like some games, where you survive multiple bazooka-blasts) but, since it was an arcade, that's only meant to gobble up quarters. (and the bosses don't die with a single blast, bye bye semi-realism

)The enemy's bullets move much slower than yours (usually, that rule has some exceptions), and there aren't really that many different enemies around.

The bosses are quite original (well, some), but there is practically no story that leads to them, just a few funny phrases, usually made by some apparently very dumb bosses (“you in heap big trouble”, and let's not forget “Oh, those terrible men, please help”).
Since there's no story, they couldn't make the game much longer for fear of making it boring.

The previous section makes the game look very bad, but it really has its good sides. As I said, it's very addictive, and great for playing against/with friends on a dreary afternoon. The graphics are good, and those chickens running in front of a stampede...quite funny. (well...)
The music is also very good, and fits the game extremely well.
And since it's almost impossible to beat the final boss on your own, you might be busy for a while. (That's why I sent the cheat file along with the game, for those of you who will be getting extremely frustrated)

The game has some interesting features as well, like horse-riding, train-jumping and the 2 bonus levels which are the most excellent chance in the game to beat your friends at shooting. They remind me of some old NES shooter...

All in all, more than enough to make the game worth playing. Happy hunting, cowboy...

My friend had this on SNES. It's a DAMN good arcade port.

We even busted this out on the RetroPie via netplay not just 2 weeks ago. Still a great, tough, but beatable shooter. The SNES version is more vibrant, and the SEGA version was more dark, And only had 2 characters.

The added 2 character on SNES shot 2 guns, for 2x damage. making it the easier of the two.

Derrick:
This is the best SNES game to date, in my opinion. I love it.
Lorder Mona:

this page is very beautifuil

this page is cool. 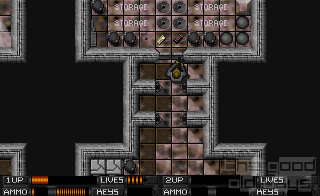