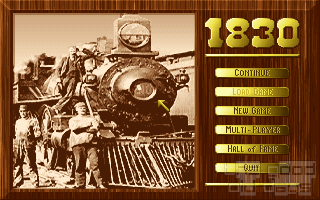 A good adaptation of the classic board game. No doubt the port to computer from the tabletop was done in response to Sid Meier's Railroad Tycoon, a game co-created by one of the designers of the board game original. It is honestly probably still one of the most accurate adaptations of the golden age of railroading in America, showing clearly how the early robber barons bought up earlier, smaller, less profitable companies, and used them to construct huge lines - additionally, it's heavy focus on the stock market is quite realistic, something that the Railroad Tycoon series never quite got 100% right. Whereas the Railroad Tycoon series always had model railroad simulation elements, 1830 focuses solely on the business aspects. It is possible to win a game without even running a railroad!

Essentially, the gameplay is as follows. It starts with an auction for the smaller, earlier railroad companies. They pay revenue to their owner every turn, and also have special abilities, such as granting you a free stock certificate, or a free track space. After this, you enter the first stock round, where the players can buy or sell stock certificates. You set an initial “par” value for a corporation's stock when you first purchase a share; the corporation will start operating with 10 times that value in money. There is a strategy as to whether to go for a high par value, which will cost you more money to start, but will be able to buy more trains - or to set a low par value and get it started cheaper. Whenever 6 shares of a corporation have first been purchased, it is “floated” and begins operating. The president of a corporation is whoever owns the most shares; you can “dump” a corporation onto another player by selling a bunch of yours.

In between stock rounds are “operating” rounds, where the Presidents of the various railroad corporations take turns placing track, running trains and collecting revenue, and buying new trains. At the end of your turn, you can choose whether to pay dividends or keep the revenue within the company. While all railroads share track they can connect to, you can place stations which prevent other corporations' trains from going past them. Each corporation starts on a different area of the map, allowing for different strategies. You can purposefully place track in such a way as to cut off your opponents.

The progress of time and technology is represented by the trains. Whenever all of one kind of train is bought, a new “era” begins, with new rules and effects. For instance, later on, all of the early game trains disappear - which can leave a company unable to afford any trains, and unable to collect any revenue! The game ends when somebody goes bankrupt, or the bank is broken. The winner is the player with the highest net worth in cash and stocks.

My complaints are that it is a hard game to pick up if you're not already familiar with the board game, and it is sometimes difficult to get information on the effects of what's happening in the game - particularly in that there are certain screens of information you can only see when it is your turn on the board screen. 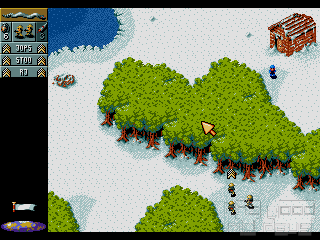