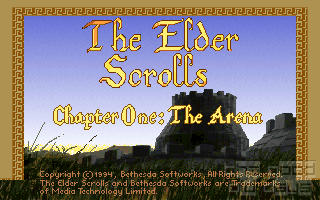 The first game in the Elder Scrolls series, it is - like many of them - an incredibly flawed, broken, not-at-all-finished game, that has so much appeal and good ideas, that you play it in the wish that there could exist a better version of the same game.

Arena started as a fantasy gladitatorial combat game, where you would travel the mysterious lands of Tamriel with a party of warriors, fighting matches across the world, until finally having the championship tournament in the Imperial City. However, the team of developers kept adding more and more fantasy RPG elements, until eventually the decided to scrap the gladiator element altogether. They'd already done the cover art tho, so they slapped “The Elder Scrolls” onto it to make it sound more fantasy-y. However, they did not have nearly enough time to make this game into the game it could have been.

You start out in a completely random dungeon that resembles a randomly generated Wolfenstein 3D level (the game uses a similar rendering engine), that is way too difficult for a 1st level character. Like its sequel Daggerfall, your best hope in Arena is to find a walkthrough and run for the exit.

The game has many dungeons like that, with nonsensical labyrinthine layouts, and walls that all look the same. The dungeons for the main quest are pre-designed, but the rest of them are procedurally generated. Upon exiting the first dungeon, you find yourself in a city - the towns in the game are pre-made, but the textures and names of buildings are procedurally generated as well. Once you leave town, however, the terrain is literally random; to find a dungeon outside of town, you simply walk away in any direction and wait for the dungeon to randomly show up. This makes fast travel a literal necessity because you can't travel from town to town without it. The interesting thing about this world, is that it takes up the entire land of Tamriel. It is fascinating to venture thru these lands, and then compare them to later games where they have been remade in far more detail.

And what do you do in this world? You fight in dungeons, level up, and primarily complete the most cliched hackneyed main quest in a franchise famous for cliched hackneyed main quests. The emporer is in a pocket dimension and has been replaced by an imposter, you have been summoned by an incorporeal magic user to find the 8 pieces of the Staff of Chaos, blah blah blah. Very generic.

And that's kind of it. The only other thing to speak of is the game's best feature, the glorious over-the-top magic system. You can literally get a spell to delete walls, which is honestly the game's best feature. Sadly, I can't reccomend it other than to play for a few minutes as a curiosity. If you want to see a more playable procedurally generated Elder Scrolls game, try Daggerfall (though that game is also broken enough I'd recommend waiting for its Unity source port, currently in development, to get finished).

everyfan:
Feel free to share anything about The Elder Scrolls: Arena (1994) here!
[Reply] 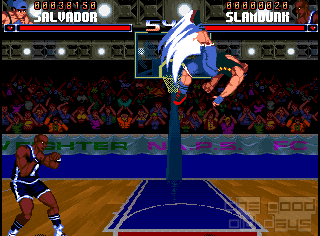