Joan of Arc
for Atari ST 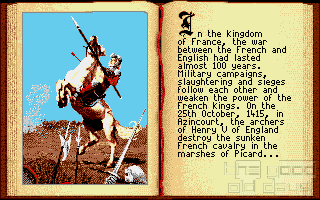 Defender of the Crown was a troubled production. As the deadline was approaching and the initial development team fell more and more behind schedule, not only some features were removed from the baseline (which re-appeared in later ports), but also some essential changes were made to the basic game mechanics. One of them was the switch from real time to turn-based. Although Cinemaware later released a not dissimilar game which did sport real time gameplay, they never re-visited their initial genre-defining classic in this respect. So somebody else did it instead. Enter Joan of Arc.

The similarities are, to put it mildly, staggering. You move armies around a strategic map divided into sectors. Just that this part happens in real time. Certain conditions, such as the siege of a fortress, trigger small action scenes. These include, among others, controlling a fighter in side view crossing swords with enemies to enter a castle as well as controlling a mounted knight in an "honorable" duel (which, of course, happens to be the hardest scene to master due to extremely tricky timing).

Being an Atari game instead of Amiga, the game doesn't quite match its role model's graphical standards. Everything looks somewhat washed-out and blurry due to the strongly interpolated colours applied to the digitized photos used as backgrounds. Animations, at least, are quite smooth and believable.

Gameplay is actually a little more complex than expected. It is an interesting approach that the game begins with not all strategical options being available to the player. With only one army available and not having been crowned king yet, many features only become available after a success on the first necessary military campaign. Only after capturing the city of Reims, the game actually begins proper. This not only gives a bit of an Adventure feeling to the early game, but also provides a smooth learning curve to the player as he can focus on the military aspect completely at first.

This is where one major imbalance in gameplay already becomes apparent, however. Conquering and defending cities and fortresses is handled through an action scene, of course. It is modelled after Crackpots, with the attacker in the role of the spiders and the defender on top of the wall throwing down bricks or pouring tar. In the defender role, the player only gets a single soldier standing against multiple enemy knights climbing up at the same time. In the attacker role, the player only gets a single soldier at a time climbing up while up to three enemies are standing above. AI-wise, this apparently wasn't even considered sufficient, so the player also has to go through the already mentioned swordfighting challenge on top, which does not even exist with roles reversed. Meaning the computer player is always conceptually given the advantage.

Which is an essential point, as these arcade sequences are actually where the game is won or lost. Although some really nice game features are introduced gradually, such as diplomacy with other lords, espionage, sabotage and royal justice, they could be considered meaningless by a player who simply trains to be good at the action parts. In a similar vein, having multiple cities per province – and them therefore being in a "contested" state quite regularly – could very well introduce additional strategical depth. None of these options substitute for successfully mastering Crackpots and swordfighting.

Joan of Arc could have been a much better game if it had allowed for fundamentally different strategies to win. The way it is, it nevertheless allows for a lot of fun to be had, provided the player makes the conscious decision to actually dive into all the depths and use all the breadths is offers, even if some may be purely optional. The additions to the basic concept are all good, appropriate and entertaining ones; it's just their integration which isn't quite as tight as one could wish for.