Day of the Pharaoh
for Atari ST 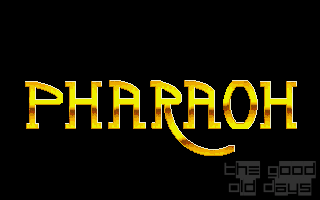 The pharaoh is dead – long live the pharaoh! If only we knew which one! Well, the player knows it should be him, obviously, being the real descendent of the old, murdered ruler. Unlike those pretenders to the throne. A real pity that this actual prince is stuck in some low social caste, unknown to the general public. So he needs to fight his way back up the social ladder to regain his rightful position.

Starting small, the options are somewhat limited at first. You have a small ship and some startup capital to trade goods up and down the Nile. Also, you own three chariots of war in your possession, which you can use to repel invaders or marauders and thereby make a name for yourself. Making money and gaining initial recognition, additional game features will gradually open up, such as making a profitable marriage, constructing/financing representative buildings or making sacrifices to one god or another to get them on your side.

Following up on Joan of Arc, Pharaoh offers a similar mixture of gameplay activities. Whereas strategic planning remains the foundation of eventual success, good reflexes and timing are required in action sequences as well. For instance when shooting arrows from the chariot, navigating a ship through rocky waters or repelling attacking pirates.

Even though the building blocks are all there, the game doesn't feel quite as coherent as its spiritual predecessor. The action feels somewhat forced at times; while the arrow shooting is fairly entertaining, it makes little sense in the scope of the "plot". The rock-avoiding journeys occur much too frequently and while the gradual opening of gameplay options may have been a strength in Joan of Arc, it occurs too slowly here, keeping the player stuck in the almost pure trading phase for too long – the trading not being particularly interesting.

Inexplicably degraded graphical and animation quality only reinforce the impression of a rushed sequel. Not a horrible one, but without the immediate appeal the older game drew its players in with.