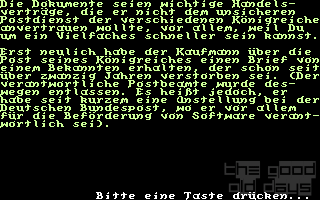 What started as a simple delivery job turns into a new adventure: in the trading town of Lübeck – err, Trahve – our protagonist just happens to come by a damsel in distress and learns about the treasure of a former pirate captain in the process, which just happens to be hidden in her basement. Just that this basement is chock full of deadly traps; and other shady characters are also after the gold.

Meaning Schwert und Magie takes another thematic leap, although this one turns out to be not quite a far as originally expected. Real pirate atmosphere remains largely absent in this dry cellar populated by generic zombies. The third episode also somewhat disappoints in other respects. Short overall length, few fights… the number of rooms containing a couple of finally irrelevant objects each fuels the suspicion that the developers play for time rather than having a sensible design in mind. There are even just few traps, although those were sold as the big danger initially. Which may be because multiple choice gameplay just doesn't lend itself well to having 'hidden' traps: even only the existence of an option to examine something 'carefully' at first will obviously make the player choose it every time by default.

A couple of in-jokes keep motivation at least up to a necessary minimum in this overall eventless cellar. The fight with a demonic double who mirrors the current player abilities certainly is a good idea, because it is dangerous regardless of how strongly developed one's character currently is. Though above that, there really isn't anything noteworthy to discover, making Das Piratenhaus the weakest of the Schwert und Magie games so far.

On the technical side, you can import your character from previous episodes again. As a new feature, you can select one of several fonts. This isn't a bad idea per se, even if the default one wasn't all that bad to begin with. We're used to much worse (ultra ornamental) from certain other text adventure engines. So should you actually prefer ornamental (urk) or ultra-simple for best readability, the game will enable that. 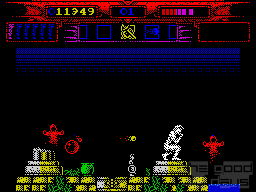