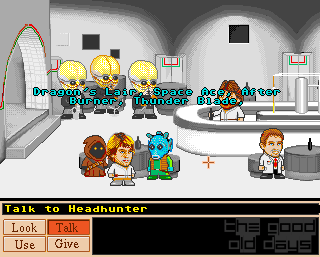 Compared to when this site started, "retro" has become "mainstream cool" in the meantime. This confronts us with all sorts of attempts, sometimes genuinely coming from somebody's heart, sometimes out of cold-blooded calculation, to capitalize on this trend. When it is for money, clearly riding the commercial train, we should be extra cautious about it. Though even freely available works may fall into one trap or another. Retro Wars Episode IV¼, for instance, embodies pretty much exactly what I bitterly complained about when first wrote about the emerging retro trend five years ago.

There is nothing technically wrong with the game. Set in carefree Lucasfilm adventure tradition, being puzzle-light and short, you'd think nothing could possibly be negative about it. Especially being made in AMOS, a language usually associated with simplistic games which show their amateurish origin all too clearly, the final result is quite impressive. Considering all that, why look a gift horse in the mouth?

It could be harmless if it weren't so bloody opportunistic. It's not enough to be set in a mock Star Wars universe (yaaaaawn), but we also get H.G. Wells, his time machine as designed for the 1960s film, a guest appearance of Tron… one guy looks suspiciously like the main character from Heavy on the Magick, and yes, this fact comes up in the protagonist's conversation. Just like a CD32 console ("with MPEG extension") being passed around as a "valuable artifact". Or somebody bidding on a classic games package on ebay.

The problem with this approach is that none of it leads anywhere. It is pure name dropping for its own end. Players are probably supposed to smile and think "Oh, yes, I know this one", also known as the Family Guy effect. As much as I appreciate the visible efforts of putting this game together and even having the well-modelled face of the best actor of all time appearing in one cutscene, it is something I just can't get myself to understand. Sorry, guys, your other game is much more likeable, regardless of genre or playability considerations, because it at least stands on its own feet – in spite of paying deserved tribute to a nostalgia piece.

P.S. Should you, the reader, feel differently, consider the chance to buy a boxed copy. At the very least, it is a quaint curiosity!