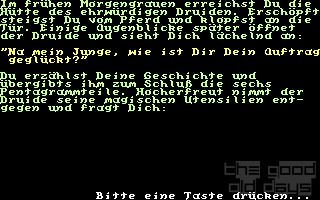 A certain count Alucard has rented a feudal mansion on the small island of Romania. Since he moved in, little boys and girls keep disappearing from their beds in the middle of the night. The local druids took action and magically locked the vampire inside his house. They simply forgot to include the count's henchman in the ban. This way, the bad guy got hold of several pieces of the artefact whose power could free him again. The last druid calls our now seasoned adventurer â€“ tonight is the final chance to defeat the bloodsucker once and for all.

The settled and by now hopefully well-known multiple choice gameplay of the Schwert und Magie games is pushed hard towards the complexity limit in part five. Roaming around the countless corridors with multiple doors and branches each for sure would have been much more intuitive with a direct control scheme, for example using the cursor keys, coupled with the already present top-down schematic graphical views of the locations. Not just that, but for the first time, there is real danger of running into a dead end where there is no escape from anymore in this vampire vault.

On the plus side, there are again some nice new ideas. Amulet pieces found will temporarily boost the character stats, which, however, is urgently required anyway in order to survive the ultra tough fights. Speaking of fights, a special guardian keeps returning after being defeated, but it only attacks the player if he takes certain stupid actions. This limits the usefulness of the typical playing strategy to simply try out all possible actions. Last, but not least, numerous weapons can be found throughout the game which show different effectivity against different opponents.

In spite of everything, the difficulty of the fights and the general feeling of being almost lost stays predominant. The adventurous ease of previous installments has been lost in blood sucker mansion, which has too many locked doors and has its player juggle with all too many keys. Professional adventurers may appreciate this, but up until this point, the series gave the impression of targetting the lunch break crowd. This installment does not embody a paradigm shift yet, but the gradual series development does shed some doubt on the limits of this direction still making sense. 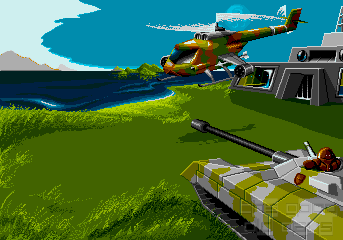