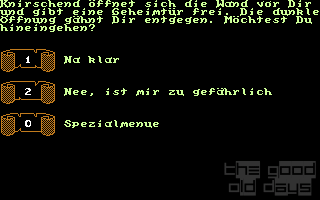 Our adventurer just can't catch a break. Even though kings have been in his debt on several occasions and he has been rewarded with jewels, he is broke again; he even had to sell his sword! Luckily, his next employer provides a new one. We're supposed to retrieve a magical orb from the ruins of a late colleague's former home.

Things couldn't really go much more generic. Which won't spare you the most extensive introductory exposition of the whole series. Before even getting to the first player choice, you will easily have to spend (depending on how fast you read) a number of minutes well into the two-digit zone. The introduction tells of epic wars and spectacular battles as well as tragic events… all of which makes the actual adventure, once it begins proper, look like a rather poor substitute. The basic premise of exploring a mysteriously destroyed environment may harbour quite some potential for thrills: what has happened here? In spite of the extensive amounts of text, however, the prose just doesn't manage to fulfil this promise; no appropriate atmosphere is to be found.

It's just that the interaction is much too focused on applying repetitive mechanics (searching for secret passages…) in interchangeable surroundings. The exerted attempt at writing humourously doesn't help, either. Even though little jokes breaking the fourth wall have always been an integral part of Schwert und Magie, they have never been as omnipresent as in part 6. Turning them from somewhat funny and surprising interjections into an annoyance which the player can never get rid of.

The poor quality of the prose, which even in previous installments was nothing to write home about, unfortunately comes to the fore in this one, as storytelling and gameplay have swayed out of balance. Telling a more fleshed out story would be a path to consider, but such a story would then need to be reflected on gameplay level or anywhere else as well. Second, the tone would need to be appropriate for the contents. Particularly if – for the first time – there is really absolutely nothing new to be found gameplay-wise. 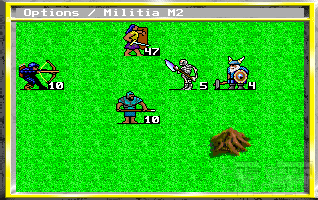