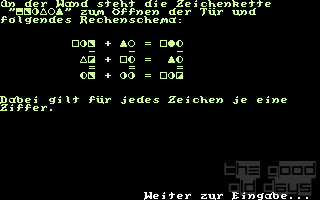 Mermaid Sara tells our adventurer of a vast underwater world previously unknown to him, which her people share with the Atlanteans, who have physically adapted to underwater life after their island was swallowed by the ocean. Unfortunately, war has been raging for several years. This was triggered by a holy Atlantean statue disappearing, for which the mermaids were blamed. Sara is subsequently kidnapped by Atlantean soldiers right in front of our hero. Thanks to a special kind of chewing gum, the player's alter ego is able to breathe under water, so he throws himself into the waves and dives down.

What follows could have been an interesting change compared to the usual series fare, both thematically and concerning gameplay. Exploring an alien world, which is fundamentally different from ours, is a common trope of the adventure genre. On top of that, an underwater world could physically work differently than what the player is used to. Disappointingly, Unter Wasser! scores on neither point. It doesn't reflect or use the unfamiliarity of the game world either in its storytelling or its gameplay.

The one thing which may be interpreted as pointing in a right direction is that all player status are capped. Although honestly, this really just comes across as a desparate attempt to re-balance a game which in testing likely appeared too easy when played with a character built up over six previous installments rather than an otherwise carefully considered decision. Finally, the game outs itself and comes across as somewhat insulting its player's intelligence when on entering the disappointingly tiny city, everything works exactly in the same manner as we're used to from the surface. I.e. you walk across rooms, bump into tables, which makes objects fall down to the ground clanging and so on.

Above that, the only striking thing is the already mentioned tininess. Even within the scope of the Schwert und Magie series which surely was never intended to be more than a filler for lunch break, Unter Wasser! is almost comically uncomplex. Effectively, there are three central locations which need to be visited in order. In between, there are a couple of unmotivated fights waiting and the game plays for time by stringing all too many obviously empty rooms together. After two dozens of that kind, just offering yet another meaningless decision (“left, right, forward, back, up or down?”) even the most dedicated fan must feel motivation somewhat waning.

P.S. On top of that, this game sheds some strange light on the technical development strategy of the series. Part 3 introduced a choice of font which was absent in the three subsequent installments, only to make a comeback now. On the other hand, the simplistic graphics which illustrated some rooms since part 2 and worked not too badly within the context are now nowhere to be found. 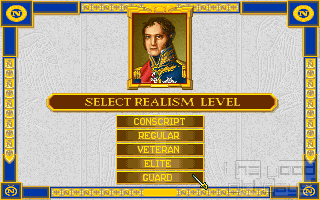