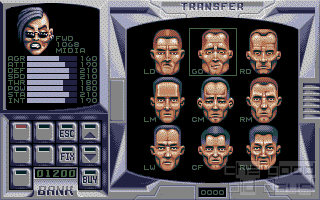 The successor to the best sports game of the 80s (see the Amiga section for the first part) - published on the Atari first! A few years after Speedball 1. Corruption and violence have driven the sport underground. At least that is what the intro says. There's not really much more violence, but at least the corruption has obviously been eliminated (no bribing the officials anymore

. Anyway, you're the manager of a team called 'Brutal Deluxe' (what a sound name!) which is a member of the second league. And now guess what you have to do...

Actually, if you've really never heard of or played Speedball, there are still two possibilities - manager simulation or actual sports game. To make it short: it's an action-packed sports game in which you directly influence the action on the field. Speedball is a bit hard to describe. It's a bit like a handball match where the referee has lost his glasses. So the players carry the ball around as they wish. At least until they're stopped by an opposing player - by any means necessary.

That doesn't mean there aren't rules though. In fact, they're quite elaborate when it comes to scoring. That is not only done by goals (still the main source though), but you can also hit special targets on the field: stars on the wall which, once hit, begin to glow or a little looping. Nice extras, they really add some spice to the game!

The top-down view on the field works great. The players are easily distinguishable, you always have an idea where you currently are, in which direction you're running and so on (don't laugh - that's not the case with certain new sports games!). This 'static' view also makes the controls very easy, even catching the ball from the air is easy after half an hour of playing

The only thing I'd prefer to have changed is the zoom level. You're too near, a little more overview wouldn't hurt.

Between the matches, there is a little 'manager part'. You're awarded money based on your performance in the last game. With that, you can buy new players from the transfer market, buy better equipment for your players (Speedball is played in full mechanical suits of which you can change every part individually) and so on. Certainly a nice addition since it adds to the long time value.

The game has been improved compared to its predecessor on the whole. The action is even more fun, it's extremely fast, sometimes frustrating, but guaranteed to glue you to the screen. Each team has more players than in Speedball, but the fields are also larger, so that is still balanced. The AI of your 'teammates' (you always control the player nearest to the ball of course, I mean the ones you don't control in one specific moment) is good enough to let you complete nice tactical maneuvers and score beatiful goals.

Speedball 2 might be the best sports game in existence. That doesn't mean it's perfect though! It just happens too often that you steer your goalkeeper away from the goal 'by accident' (because of the controlled player suddenly switching to him). The players of your team and on the transfer market remain pretty much 'faceless'. They don't only look almost identical (fans of other Bitmap Brothers games will notice slight similarities

, but they also don't seem to have any real identity. On the field, just the position of a player is shown. It would be nice to have some 'statistics' after each game how well each individual did. Same goes for the other teams. They don't differ enough! For some reason, some are better and some worse, but somehow it's never really obvious why. At least the looks could change, give them another shirt, make them mutants or something! It would fit to the Rollerball-atmosphere at least (and I'm not talking about the crappy remake).

Last but not least, why have I chosen this game for the Hall Of Fame? Sports games were one of the most common genres on the Atari ST. Most of them dealt with football (soccer). And they all played very similar: very much action, not much fuss about tactics, players and all that. Speedball 2 is the prime example of how this genre could have been developed to perfection. It comes closer than any competitor!

Festy:
One of the greatest computer games ever. I played this for hours on end.
Mr Creosote:
Feel free to share anything about Speedball 2 (1990) here!
[Reply] 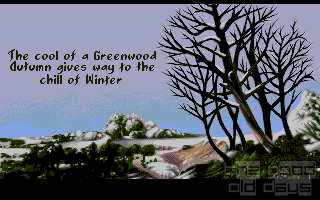