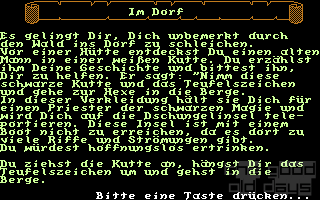 The previous part left a bit of a disenchanting impression, so expectations for part 8 will have been low. The underwater adventure previously played may actually have been the low point of the series by objective measures, disregarding general series fatigue. All the better that this one is indeed a very positive surprise: Insel der Wunder (island of wonders) brings the series to a clean close. Almost as if they suspected that this could be the last part and wanted to leave us with their best.

It's not that the plot is following any sensible motivation. The player is simply “mysteriously” transported to an island whose inhabitants are slowly turned into stone by evil magic. Their goddess of protection, Ledana, seems powerless to stop it. Their last remaining hope is that the player should locate the curse's source on one of the other islands of the archipelago and put a stop to it.

Then again, an intricate, logical plot may indeed be unnecessary to nevertheless score in this genre. One of the greatest gamebooks I know to this day is The City of Thieves. It is about an evil magician threatening an innocent city, so the bad guy needs to be stopped. The confrontation of the baddie – intended as a big bang here just as there – in retrospect is, however, quite anti-climactic. Rather, it is the titular city with its dozens of winding, gloomy alleys, the many encounters with shady characters and plenty of possible actions which stick to one's mind.

In the same vein, hopping these islands, the journey is its own reward. Even though truly alternative paths cannot be found strictly speaking (likely a technological limitation) and in all respects, the game's quality remains several levels below the City of Thieves, it does get the feeling of a grand adventure across, leading the player through fundamentally different areas: a city inhabited by Orcs, swamps, cave systems, temples, fortresses… The fights are similarly varied. It may make no or almost no difference gameplay-wise whether the enemy is a primitive brute or a mighty magician, but it helps atmosphere significantly. Even more so since many of the most important encounters can actually be resolved in non-violent ways using the right objects or other tricks.

One part of that is that most encounters are now actually graphically illustrated. Replacing the abstract room layouts found in some predecessors, you now get nicely pixelled portraits. Definitely a good step in the right direction!

The whole journey finally being completely episodic, each of the episodes effectively only consisting of locating one or two relevant hidden objects – who cares? The overall impression while playing is nevertheless a different one and keeping the corny one-liners at a minimum in favour of a solidly written, more serious voice suits the game well. Whether more games in the same style could have worked repeatedly can nevertheless be doubted. It remains a purely hypothetical question in any case. The way it is, this final part of the series sticks out from the rest of the series and therefore leaves the hardened veteran with a position impression of the overall series even if it may have been a bumpy ride until here. 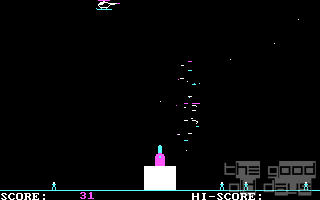