Flowers of Mysteria
for PC (Windows)

Flowers of Mystaria is a very classic text adventure. A rather solid example of its kind, because there are next to no bugs, it is quite playable and it has a decent length (although it is finishable in one sitting). Yet it has one problem: It just is not overly exciting and could have used a bit more polish.

The setting is the archetype for this kind of game, that is a nondescript fantasy world, whose main feature is a dying king in an equally withering country. Sadly the lack of content is not only limited to the background: Most of the scenery lacks any kind of proper description too and almost any action taken besides the main path leads to a generic none-response. But even things you are supposed to look at or at least use in one way or another summarizes just the barest of function. That lots of the 'rooms' are rather empty too does not help immersion either.

But a sparse word count would not be that much of a problem, if there would be some exciting things to do. Sadly there is not. It begins with the quest already: You, the nameless hero/heroine, set out to gather four flowers in order to heal said king. It seems hard to get any more cliched than that, especially in the fantasy video game genre. The things you actually do to fulfill this quest are not that much more adventurous either: Get an oar for the boat, climb a wall with a ladder, fill a bucket with water etc. Those actions which are a bit more challenging are not hinted at at all, so you have next to no chance to solve them on your own.

In a way you could say that this lifelessness is fitting to a dying land, the heavy burden that lies on this kingdom, yet it still does not make this game any more interesting. So, the main drive that could keep you going is the good old puzzle solving and exploration. But both suffer from a rigid parser. It is not so bad that you could not do the things you want to do, but at times it is a bit peculiar. E.g. you can only examine things when you have picked them up and looking at things bears next to no information. And at least on the fourth or fifth screen you will stop looking at things that are not directly related to 'solving' the game.

As for exploration and experimenting: There is no save and no undo feature, so you would assume that you could not do anything wrong. Now I am not 100% sure, but it seems like you can really get stuck. Just do NOT eat anything in the game. Or you might be left with a couple of bones which are of no use to you.

So, what is left as a driving force is actually finding out what will actually happen, when you reach the king with the healing potion. Well, to be honest: It is a let down too.

Which is sad, because to feel let down you have to have had some hopes, some expectations. Which you might have while starting this games, since as mentioned above the programming is OK and at the beginning the lacking content is not that glaring and even later on there are hints at a decent writing skill and good jokes. Yet, there could and should have been more of it.

But as it is now, Flowers of Mysteria is a below average text adventure.

Herr M.:
Feel free to share anything about Flowers of Mysteria (2018) here!
[Reply] 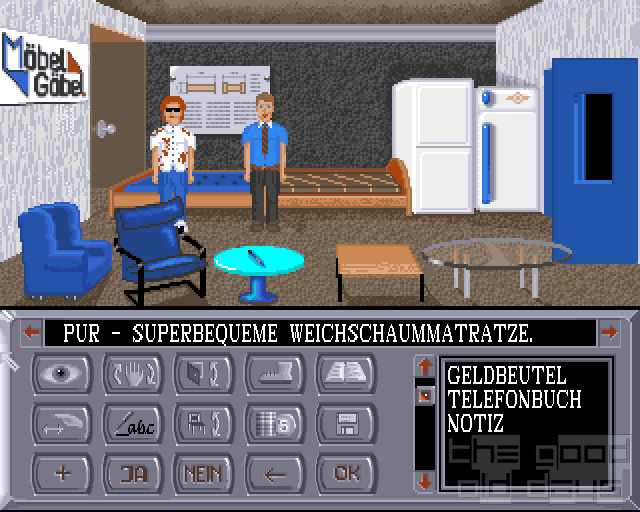