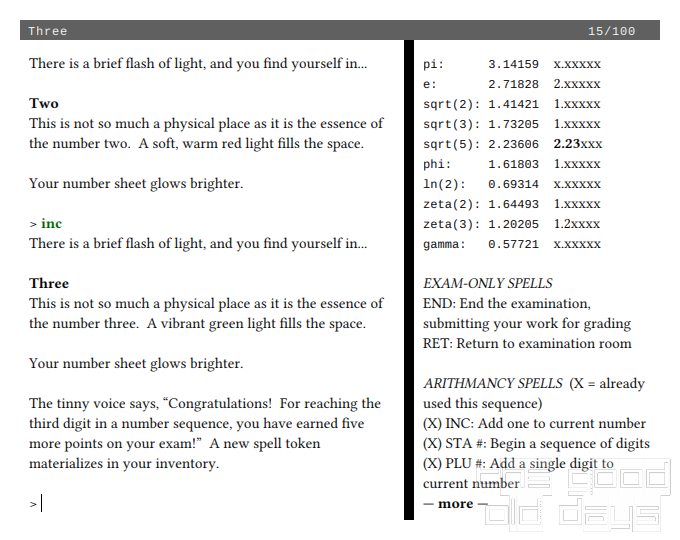 Anyone who has done some serious maths will tell you that it can be quite magical. Even with the most basic of operations you can do some impressive tricks with astonishing results. It is that feeling of wonder you get, when you finish a long set of calculations that end up with surprising – simple but true – answers which makes people love mathematics. Just think of the flow of solving a problem, that single moment when everything fits together and you see all the connections, and you might know what I mean. And this magic moments is exactly what Junior Arithmancer is all about.

The fitting scenario is as follows: You are an apprentice of said Arithmancy – a spell school all about numbers and their transmutation – and have to take your final exam at a magic college in order to enter the ranks of the Arithmancers. To reach this goal you have to prove yourself by casting spells which conjure certain numbers. Right at the start in the examination room you will notice that the game is less of a classic text adventure (even if it uses an engine that would imply this) but rather a clever puzzle game based on logic.

Like with a lot of the better candidates from this genre the concept behind it is simple and easy to learn, yet it has a lot of potential and leads to many different challenges. As mentioned above you have a special spell arsenal in order to solve a set of tasks. They involve either creating a sequence of numbers (based on some of maths very special numbers like pi or e) or calculating a more or less specific single number (like a number larger than 2 billion or something not quite real). If you want to give it all you can even try yourself at some colour based extra puzzles.

Each time you want to solve one of the puzzles you start off with a one digit number of your choosing which you can manipulate with a set of operations – your ‘spells’. At first you are limited to the basic arithmetical operations but after a while you gain access to a bit more advanced calculations like squaring numbers or building Fibonacci sequences. On top of that there are a couple of meta-commands like inverting an operation or concatenating numbers. To make things more interesting you can use each spell only once for each sequence or number.

To give you an example: Say, you wanted to reach the number 512. You could start with the number 5, add 7 to reach 12 and concatenate 5 and 12 to 512. Alternatively you could start with 8, multiply by 2 to reach 16, square it to 256 and make an inverse division 2. As you can see there is almost always more than one solution to your problems and some of the more difficult tasks revolve about finding an optimal (=shortest) way. In theory it might sound a bit dry, but tinkering about with the numbers, exploring all those possibilities is actually quite exciting because there are so many of them and so many interesting relations you will discover.

One thing that helps the experimentation a lot is the well balanced learning curve. Your first couple of tasks are very basic, almost tutorial like. But things get gradually more challenging the more commands get added to your spell pool (Unlocking the commands is a nice motivation too by the way). Eventually you will face those fiendishly hard puzzles which take a lot of thinking out of the box, close observation and maybe even a bit of luck. Yet as nail-biting as they might get – I am looking at you Gamma! – they are always fair, simply because they are logical after all. And you will feel an immense amount of satisfaction when you can finally tick them off your list and gain a couple of points.

The game keeps track of your progress by adding those points up to a score and it is up to you whether you want to go for the full 100 points or if passing the test is enough. It does not take much to reach one of the more positive endings, but a full score might take a couple of hours. And even if you have the highest possible score, there are still a couple of Easter eggs for when you get creative with your numbers. In summary there is lots of content and the game does its best to keep you interested in searching for it.

Yet, speaking of content, if there is one minor criticism it would be that some parts of the story feel a bit tacked on, at times even disruptive. The premise of taking this exam at a number magic college is great, but the school politics mentioned in the background are distracting, especially because you cannot really influence them anyway. Those interludes still loosen things up a bit and for the more story oriented players it might be yet another incentive to keep going.

So overall Junior Arithmancer has a great concept, is flawlessly executed and with it being free there really is no reason to not give it a try… unless you are triskaidekaphobic or had a very bad maths teacher.