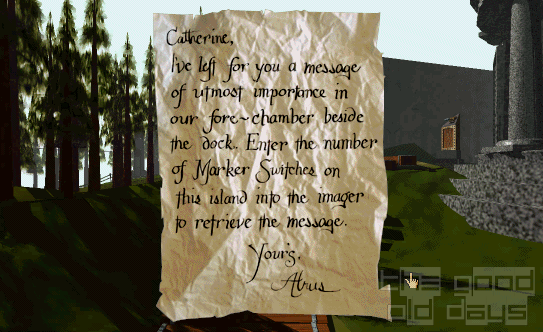 My relationship with Myst is an ambivalent one. At first, I was amazed by its 3D rendered graphics unknown at the time. Back then, I had never thought my computer could produce anything like these images. The gameplay however, wasn't quite as much fun as the game's optical qualities.

First things first… the graphics: Myst looked way better than any other game at the time. That was simply because: they cheated! All these beautiful 3D worlds of Myst were not rendered live on your PC, but instead pre-rendered by the developer. The player could only “walk” through Myst by clicking on objects or the road and the game moved to the next static image. Sometimes, they embedded QuickTime videos into certain objects, like books, or a fountain to make it look like something is moving. You could also manipulate switches and buttons, but mostly, you were looking at static images.

This mixture of pre-rendered images, videos and some interactive elements gave Myst a very weird feeling, as soon as the inital amazement had worn off. This brings me to my main criticism… the gameplay:

Unlike most adventure games, Myst offers no inventory, no death, and no dialogue. Although puzzles don't seem to have much direct connection to the game, they share a commonality. They take on many forms but follow a consistent thread. Some puzzles are very challenging, even obtuse, creating an odd paradox: many buy Myst, but few complete it. To me personally, Myst is quite fun to walk around in. If you like staring at static screens. You have to solve some quite complex puzzles. Yeah, that's kinda cool, too. But… I somehow never really felt emerged into the world of Myst. It was ok… but nothing more. Myst is one of the games you really, really wanted to play at first, but it loses much of its appeal once you actually play.

Today, I guess Myst is mostly some kind of museum's piece in my collection. Sometimes, I take a look at it for nostalgic reasons, but I never really have the urge to play the actual game again. It's not bad… but also not great.

Moebius:
Never really played it, though heard of it a lot of course and seen some of the screenshots a number of times. Was gonna play it recently, though didn't find a quick way to run the original game on OS later than XP. There is also a desktop edition which came out in 1998 i believe, but that one too doesn't run on 64-bit OS. I guess i will either have to try DOSBox with pre-installed Win 3.1 or VirtualBox with XP.
[Reply] 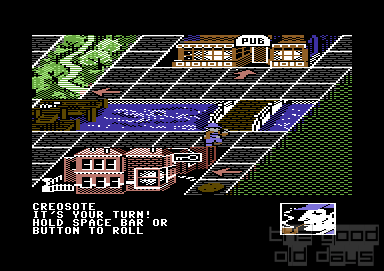