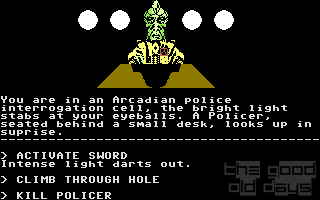 In the year of 2453, the secret organisation SAROS (Search And Research Of Space) tasks an undercover agent to destroy the Arcadian supercomputer. Without this central “brain”, the Arcadians will be helpless zombies who cannot exert their power over Earth and its space colonies anymore. In the disguise of an space trader, the player takes over the agent's role in order to liberate mankind from its oppressors.

This game is based on the role-playing book of the same name published in the year 1985, which was ported as an Adventure game to the C64 by the Englishman Stefan Ufnowski a year later, and shortly after was ported to all other home computers under the label U.S. Gold.

The screen is split into two sections: a static illustration of each scene on top and below, a description of the location and an input prompt to commit actions. Static illustration not being completely correct: in some locations, parts of the pictures are actually moving. For example, at the beginning, you see the spaceship's bridge and the approaching stars. Scenery is also interactive to a certain degree, in the manner of accomodating to the player's actions. For example, the policeman's head will not be resting on his shoulders after a light sabre attack, but rather lie in a bloddy puddle on the ground. The locations are numerous, detailed and varied; the font is well readable.

Game progress is governed by the input of text commands in the typical adventure format “TAKE KNIFE”, “THROW BOTTLE” and feedback from the parser. Movement between locations is performed by entering the appropriate compass direction, like “N” for north. The spaceship Caydia, which you begin the game at, can only be controlled indirectly, because the ship has got a fixed schedule. Three planets, Tropos, Halmurius and Arcadios, are visited one after another, in order to retrieve one of the three pieces of the code granting access to the supercomputer from the respective local underground movement. This way, there is a natural time limit for each planet before the spaceship flies on automatically. On the other hand, if you manage your tasks more quickly, you can fast forward the time until lift off with the command “ADVANCE CT”. This fast forward can also be used waiting for the pneuma tube (express train on the planet surface). If there isn't a train at the station, you simply WAIT until it arrives. Waiting has its own downside, however: the more you wait, the more your “personal status” decreases. Meaning you get hungry. Which can only be satisfied with HCAP, a special kind of astronaut food, so that there is the real danger to starve on a long range flight.

Of course, there is also an inventory which is displayed at the “I” command. Once the inventory is full, a newly picked up object remains in hand until it is inserted into a “KUBE”. (Another container for objects which is equipped with an anti gravitational field which therefore does not burden the player.) This forces the player to retrieve objects individually from the KUBE in order to use them.

The game's setting comprises of science fiction elements such as space ships, light sabres, scanners, joystick-controlled jump jets and pneuma tubes along with ancient civilization achievements on the planets, such as hotels, a store, a university, a temple and a museum. These are rules by the oppressive Arcadians, who also enjoy a beer, read the bible or take care of customs. In the sewers, the player stumbles into the compulsory maze which is guarded by Arcadian robots. The Arcadians have surrounded the city with an electric fence to imprison its inhabitants.

In this setting, the player turns into a hero by doing typical secret agent tasks: the SAROS headquarters on planet Tropos can only be reached through a duct in the sewers, which can be climbed into using a rope gun. The electric fence can be short circuited with the space ship battery and a wire, and after that cut open. The university portal can only be breached by beaming: a crystal can be made to resonate with a tuning fork so that it activates the sonic sensors which then beam the player inside. On another occasion, the player can intentionally have himself caught by the Arcadians so that he can kill the interrogating officer and learn secret information.

Overall, although the puzzles are mostly logical, they are likely unsolvable for casual players. On top of the high difficulty level, there are false leads. You can torture your brain for hours thinking about possible uses for the tweezers which you have made from a bent piece of metal. The solution is simple: you don't need them. Sometimes, it is rather that the hint at a puzzle solution is too cryptic. Example: “You are at the entrance to a shallow cave. There are two crevices in the rock, one large one small. A crag snapper jealously guards them.” The solution is just to sing. Fortunately, a voucher for the REBEL PLANET HINT SHEET is included in the package, allowing buyers access to this helpful document for the price of a self-addressed envelope.

Using this walkthrough, you can turn the basically “unsolvable” adventure into an interactive novel. The descriptions are somewhat brief and hardly contain direct speech, resulting in a certain distanced feeling towards the plot. The plot itself, on the other hand, is quite imaginative and the prose entertains its reader with numerous fictitious names and creative neologisms. Onboard the spaceship, you carry a Limcom, inside the temple is a carved octoplast door, a Sycane Serpent lives inside the sewers and towards the end, you can only beat the supercomputer using a battery powered Elmonite.

Finally, there is probably the open point of whether in our current world of cell phones and the ubiquitous Internet, the ideas of the future have changed compared to those written 30 years ago. The answer is clearly yes. Today's and also the future threat to mankind will not be a powerful alien race, but ourselves. Nevertheless, dreaming and playing should still be allowed. 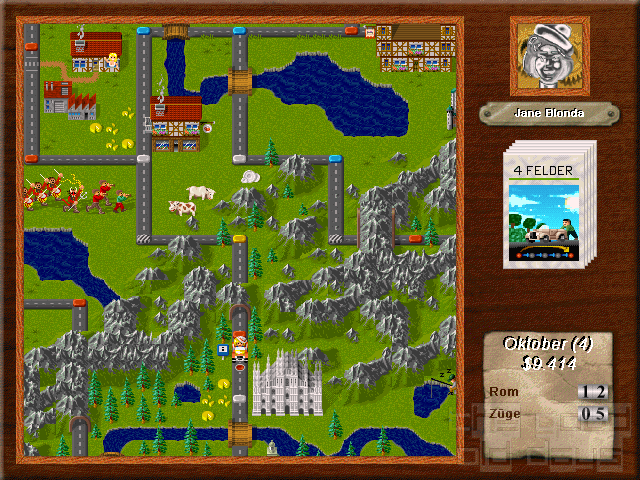