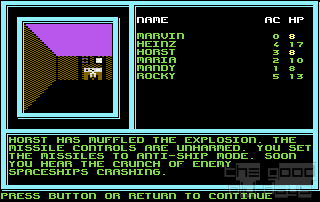 Being a declared non-fan of roleplaying games, but a bit of a fan of Buck Rogers (the 1930s serial being somewhat forgettable, but the first season of the 1970s series being totally excellent), this game always had me torn. I gave playing it many serious attempts, sometimes not getting anywhere, but gradually getting better at it. Time to have another go! 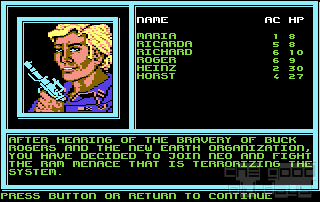 Countdown to Doomsday, from the outset, makes a couple of very good design decisions. First of all, the player is not allowed to play Buck Rogers himself or even have him in the party. Given that character's status as an immortal icon in this universe, it would have been unthinkable to have him fail at comparatively simple tasks at the hands of a less than perfect player. Second, the game opening is simply excellent: the party of new recruits of Earth's military is immediately thrown into battle when during their welcome, their base is attacked. So the game begins with a tense, action-packed scene (sort of a "quest 0") even before letting the player take a breath to really take inventory, visit the bar for some rumors etc.

After this, the player is sent on his first mission proper and although this one follows a classic motif (examining a derelict, abandoned spacecraft), a more questionable design decision shows. No overarching plotline is established yet. The player's party is simply sent on exploration missions to return to home base in between. Of course, all these small plot threads will finally come together, but the way they do needs to be gradually discovered first, as the game only gradually opens its world up to allow its player more freedom of action. Meaning the player's inherent motivation to immerse himself into the world has to suffice for most of the time the game lasts.

This world and the nature of the associated missions do help in this regard, indeed. Although strictly speaking mostly cosmetical, the change from those tired D&D style high fantasy cliché settings to cliché science fiction with horrible robot monsters, brain-eating parasites, disembodied holograms and — most strikingly – occasional ship versus ship combat is most welcome! 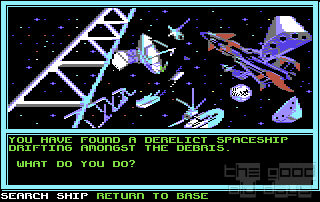 At the same time, and please excuse the tangent here, it may very well also be the game's biggest bane. As every roleplaying game, Countdown to Doomsday forces its players to take uninformed long-term decisions right from the start. Case in point being character generation. On meta level, everyone is at least somewhat familiar with D&D character classes, races and traits. You know you will need a character with good lockpicking skills at some point in each story, so having one thief in the party is standard practice.

Alright, in the Buck Rogers universe, a medic will be needed for sure as well. Though when it comes to the importance of "Rocket Jocks" or Engineers, it may not be quite as clear. Sure, the former are spaceship pilots and the latter technicians who will probably be able to repair them, but in a party of six, which should be the class to have two of (since there are five possible classes)? The manual is quite helpful to pick the ideal character race for each class, but as far as skills are concerned, it's pretty much blind picking the first couple of attempts. Acrobatics or climbing? Driving ground cars or jet cars? Will I need to fly fixed wing crafts, rockets or rotorwing crafts (even assuming I have any idea what those are)? Will I need a programmer in my crew (hint: yes)? It may be unfair to criticise this particular game for a general defect inherent in much of the genre, but it strikes particularly severely in this case. 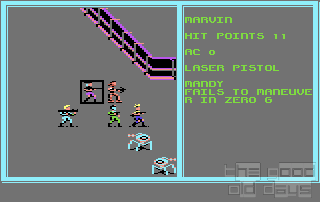 Be prepared to look at this screen for hours

Mechanically, compared to previous (fantasy-themed) games using the same engine, the tactical battles focus much more strongly on ranged combat for obvious reasons. Generally, combat feels a little faster than previously known, so it doesn't take quite as much overall play time anymore. Nevertheless, battles are still too "faceless". Most of them are semi-random encounters with just one or at most two enemy types present at the same time and placed apparently randomly on a battlefield which is empty save for walls. Those act as a boolean barrier (reachable or not) and no other obstacles, providing partial cover, for example, exist. Therefore, the tactical options, although they exist, are somewhat limited to the barebone basics: spreading the party to avoid major grenade impact, putting the stronger warriors in the front line, having injured characters take cover behind walls and beyond that, generally hoping for the best. From today's point of view, combat still takes too long, with no option to automatically calculate results existing and setting individual characters to be computer-controlled being an overall useless option as it will generally result in unnecessary casualties. Again, something not specific to Countdown to Doomsday, but nevertheless a far from perfect design decision.

Its non-epic proportions overall, criticised by the press at the time of release, may actually work in the game's favour nowadays. Having an imperfect game which doesn't overstay its welcome for sure it better than one which just will never be finished at all due to shortcomings along the way. Countdown to Doomsday's shortcomings are not too severe to seriously harm the overall flow, at least for those initiated and appreciative of the roleplaying genre. Being a science fiction or Buck Rogers afficionado alone, admittedly, will likely not provide sufficient long-term motivation to make it all the way to the end – there is too much time spent on game-mechanical activities (read: tactical combat) versus elements driving the plot forward. In spite of carefully constructed missions/scenarios, good graphics in cut scenes and character portraits, intuitive controls and surprisingly fluid progress, with limited loading times and little disk swapping, in spite of the game spanning a whopping three double-sided floppy disks.