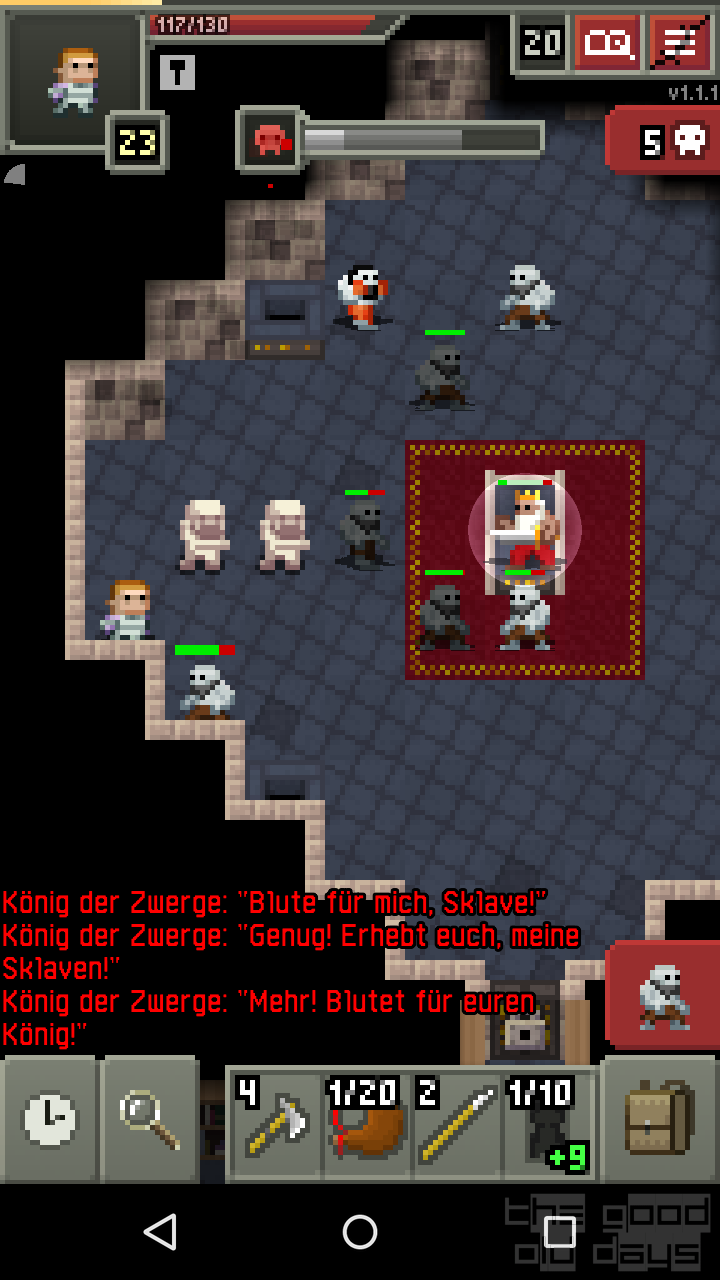 Let's dive into this dungeon. No reason, other than it being great fun! But first, a bit of history.

Actually, there used to be a mobile version of Brogue at some point in the past. Though clearly, porting a game intended to be played on a large, landscape oriented screen using a full physical keyboard to a small, portrait oriented device with typically only a touchscreen can easily be considered a Herculean task. Interface clunkiness being just the tip of the iceberg of major obstacles.

Shattered Pixel Dungeon, forked from the earlier Pixel Dungeon, takes a different approach insofar that it is an original development targetted at mobile devices, but sharing much of Brogue's design philosophy. Meaning it is its spiritual sibling without trying to slavishly imitate the immensely popular other game.

The first thing jumping at the player are the stylish pixel graphics with their somewhat simplistic, but effective animations. They provide the game with a distinct, recognizable look straight away. Aesthetics aside, the graphics also do a very good job of providing essential information to the player at a simple glance. Terrain and obstacles are visible for sure, health status of enemies is indicated with an energy bar, different animations exist for sleeping monsters, little icons indicate changes of status (such as being alert of the player's presence)…

Controls, typically a complex feat to master in a Roguelike game, is as simple as it gets. Tap to go somewhere and the pathfinding routine will find the shortest route. Tap an enemy to hit it. Tap an item to open a menu for usage options. Buttons are sufficiently large and so are dungeon squares. Quite important in a game genre where success often depends on exact movement.

That said, it is an interesting decision that Shattered Pixel Dungeon does not go the route of being a carefree, easy game. Not at all. Focused playing is a must. Each step matters, each decision should be weighed carefully. Death is often just one wrong step away.

Nevertheless, this is not a disadvantage, even on a platform which is usually used to play for short sessions in public places, such as crowded trains. First of all, the turn-based nature of the gameplay actually turns out to be a natural advantage. Momentary distraction cannot be fatal. As long as the player doesn't act, the world stands still. Second, levels are quite small, allowing for short play sessions at a time to feel organic as well. Third, the complete game's size isn't huge, either. With 25 levels, separated into five distinct “regions” (tilesets), a successful run should never take more than an hour.

Equipment is a strong point in the game as well. Taking the core mechanic of Brogue to restrict unburdened usage of items according to the player's strength rating, many pieces of equipment have both pros and cons. Those can be obvious, like an armor's stellar protection value or a curse being put on it, or more subtle. Different weapon types have certain special abilities. Magical scrolls can be used to great effects, but first, they need to be identified – same as potions. Wands can be zapped for ranged attacks or other effects and automatically recharge over time. All items can be further enchanted to improve their effects.

All these mechanics put together reward a careful, but targetted play. Focussing character development in specific areas is rewarded over trying to master everything at once. Just as it should be in such a game.

Of course, not everything is perfect. Gameplay depth is obviously not quite up to the stellar genre icons on the desktop. A level map, giving some indication of whether everything has been explored already, is frequently missed. The hunger clock, driving the player forward, can be a litte too restrictive at times, ending otherwise promising character runs prematurely in the worst case. Finally, although the integrated tutorial-like way of feeding the player gameplay-related information in the shape of torn pages is a double-edged sword. What's very good about it is how it gradually teaches while progressing through the game instead of forcing to go through a large monolithic “lesson”. However, passing all this as “out of this world” book pages nevertheless feels somewhat clunky.

All minor details, of course. Shattered Pixel Dungeon is a game which keeps its player coming back again and again, because there is always something happening. It constantly moves forward and drives its player forward. Dead time, like for example grinding, is totally unheard of. 100% of playing time is pure, unfiltered fun. If such a thing can be said about a game, it deserves a design award.

Meaningless repetition of the same tasks over a long period of time. Japanese RPGs are notorious for that: in order to level up, or reach certain skill levels, you spend hours killing wild forest animals, such as rats or snakes, even though there is virtually no challenge to it.

The game I reviewed some time before, Andor's Trail, was the polar opposite of this game in this respect.

LostInSpace:
Sorry for my incompetence. But what ist 'grinding'?
Herr M.:
Ha! This one (or one of the may derivations?) is one of the games I heard so much about, one of those games I kind of like, yet never played myself. My sister had been playing it hours on end and was quite hooked on it.

Sounded like a lot of fun (all the looting and levelling, collecting dew drops of all things in a dungeon) as well as a lot of frustration (yet another curse or ghost, repeatedly dying on level 5 of 25). One day she finally reached the final boss and was so incredibly proud that she even gave me a call. Felt almost like the good old times when we used to game away.

Or like those times back in school when someone told you about this incredibly cool game… yet it simply would not run on your system.
Mr Creosote:
Feel free to share anything about Shattered Pixel Dungeon (2014) here!
[Reply] 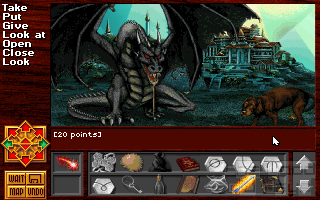