Batman: The Movie
for Amiga (OCS/ECS) 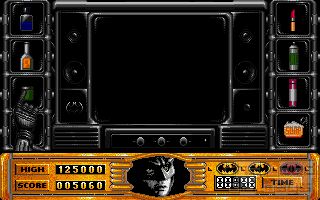 This was one of the first games I ever completed on my Amiga 500. It was released in 1989 by Ocean Software and is based on the 1989 motion picture, which starred Micheal Keaton as Batman and Jack Nicholas as the Joker. Up until this game was released, movie based games were quick cash-ins that were lacking in gameplay.

The game consists of five stages based on events from the movie. The first stage involves platforming, which includes utilizing the batclaw to reach platform and the batarang as a weapon, as you search for the Joker. This stage is somewhat difficult as there's no discernible direction to travel and the enemies attack with guns and grenades. Once you reach the Joker, you have to hit him with your batarang and he falls into a vile of chemicals, just like the movie. The second stage involves a racing section with the batmobile. The player must dodge traffic and use the bathook to fasten on poles in order to make 90 degree turns. The third stage is a puzzle game where the player has to identify various components relative to the chemical the Joker is manufacturing. The fourth level is another racing stage, but this time, the player pilots the batwing to cut away balloons without hitting the actual balloon. Finally, the fifth stage is another platform section similar to the first stage where you are searching for Joker once again.

The gameplay works well on both the platform and driving sections. The game is difficult, but not impossible. If I recall correctly, I believe I was able to complete the game without a trainer or cheat code. The graphics are very nicely drawn and the animation is fluid. The player has a health meter that transforms from Batman to the Joker as the player loses health. The sound effects and music are well done as well, and there are even digitized samples from the movie.

The only downside with the game is that it offers little replayability. Once you know the levels, they do not change, making it much easier to play through.

Overall, this is one of the best of the early Amiga games as it really demonstrated the graphical prowess of the machine. If you haven't played it, I recommend that you give it a try as it's well worth the effort.

zodiac:
Feel free to share anything about Batman: The Movie (1989) here!
[Reply] 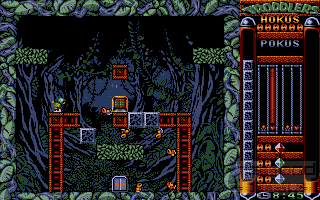