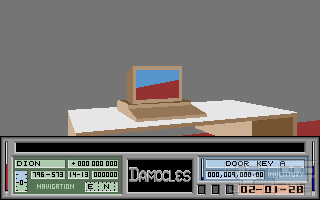 The 21st Century (hint: this is meant to be the future

). Interplanetary travel has become normal. Many planets in the nearby solar systems have been colonized. Nations have grown to the size of whole planets.

One of these planet-nations is Eris, fifth planet of the Gamma system. Five moons circle around it. A huge capital, many trading posts, spaceports - Eris isn't very special. Until its horrible fate has been discovered at least...

A huge comet - fittingly named Damocles - is headed for Eris! It'll collide and kill all life on the planet. All this has been discovered over 30 years ago. Since then, a parliamentary committee has been conferring about the problem, publishing reports, talking, talking and talking. All to no avail.

The only one who came up with a possible solution is a Professor Hantzen who has proposed to nuke the comet with a giant bomb. Three months before the final impact, the president takes a desperate last step: he hires a mercenary to carry out the professor's plan. This mercenary is you.

You arrive on Eris a considerable amount of time too late. Three months to be exact. It's only three hours before the collision with Damocles! To make things even worse, Hantzen has disappeared meanwhile. And not everybody is that keen on destroying the comet. A large company wants to use the 'dead' comet as a tourist attraction. A 'green' political party wants to 'protect' it. A strange mystical cult has some interest in it, too....

So far, so bad. But if the job pays well, who are you to refuse?

Damocles (later officially granted the title Mercenary 2) picks your character off where you left him after the first game. The game mechanics and presentation are similar: As one of the first games ever, Mercenary offered a full-featured 3D world in which you could walk around in smooth '360° graphics'. That's right, no walking step-by-step in 90° turns, but full freedom! Damocles has even better graphics! All graphics are full-modeled 3D objects made with vectors. So a building won't turn into an uncoordinated piece of pixels once you get nearer, but looks as good from near as it does from far. Revolutionary!

The controls have been fit to the player's perspective. Walking around is of course done via joystick, but all more complex controls require the keyboard. That's only logical since there is a lot you can do. There's standard Adventure stuff like picking up objects, using them and so on, but also controlling vehicles, planes, spacecrafts and something like that. All in all working very well.

The 'game world' is really huge! On Eris alone, there are 22 locations. And we're talking about a solar system consisting of 28 planets and moons in which you can move around freely here! Sure, most locations aren't all that important. But that's only realistic, isn't it? And the designers used a very fair way to prevent you from getting lost: the important buildings and locations are always 'marked' in some way - who would not head for the only green building in an otherwise grey city? And in the other direction: Who'd not notice all 16 million (!) pyramids on Midas are identical? There.

On the first look, Damocles seems fairly linear. You're always told what to do next and where to go. Don't expect you can solve the game that way though! It's almost possible, but only almost. And that is of course only the easiest, least interesting way! On the whole, there are 5 ways to win the game. And limitless possibilities what to do in the meantime to get there. The strongest point is in fact just enjoying the vast world: explore it, visit new locations, trade - you can even start behaving like a space pirate

But I don't want to spoil all the fun here.

Mercenary was already great, Damocles even tops it! There were two 'data discs' for the game. Those were in fact just saved games which threw you into the same old story at a certain point and gave you an additional goal. And there was a real successor (can't say anything about that though).

In 1995, there were even plans to port Damocles to the PC with highly improved graphics (better late than never)! The first screenshots looked highly promising, but the game was never released. But even the fact that it was considered five years after its initial release shows how immensely popular Damocles was - it stood the test of time not only because of the revolutionary technical aspects, but also because of its great, deep and demanding gameplay. Classic Adventure lovers should beware though: the flying requires at least some basic skill and you should not be too lazy to write down some stuff (especially the coordinates for navigation!) on a sheet of paper! Otherwise, you'll get lost somewhere on the ocean sooner than you think... 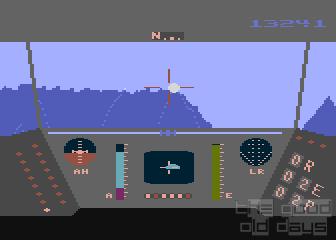