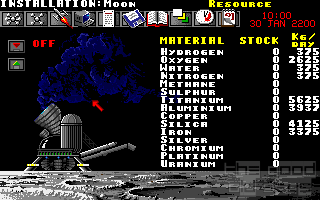 Millennium 2.2 is best described as a space strategy game with a unique twist as opposed to the 4X space strategy games established by the Master of Orion series of games. You play as a leader of a moon base, which serves as the last refuge of humanity after an asteroid strikes earth. What makes the game so addictive is how the story unfolds, so I do not want to describe the game in too much detail.

The game's focus is to locate and mine resources to support production. The moon itself has limited resources, which requires the player to research, manufacture, and source other minerals across the solar system in order to sustain the moon base and to establish other colonies. The solar system is accurately portrayed and includes all the planets and moons of each planet. Sorry Pluto, at the time this game was produced, you were still considered a planet.

The game play is mostly menu based and there is an option to accelerate time, which the player will utilize often waiting on research, production, and space travel. Information is effectively presented and the graphics and sound are what you would expect for a Commodore Amiga game at the time.

The only negative I recall from the game is the inclusion of a real time shooting section, which for all intents and purposes shouldn't have been included in the game as it's frustrating. It's also difficult at the start as you will likely be stuck searching for a much needed mineral. You'll want to search the asteroid field to find this mineral in order to begin colonizing.

In conclusion, the game is very addictive, so much so that I remember completing it one night, until the early morning hours, in my youth. If you enjoy story driven strategy games, you will thoroughly enjoy Millenium 2.2.