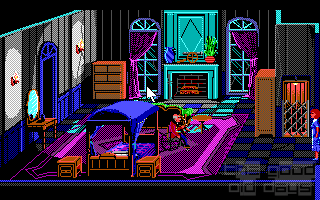 Whatâ€™s up with the testosterone overdose in Sierra games? Most of their games only have playable male characters. There are some exceptions of course, like King's Quest IV, in which you control Princess Rosella, as well as several Leisure Suit Larry games, in which you can control (although briefly) Passionate Patti. Luckily this time, Sierra sure managed to please the ladies! Itâ€™s high time for some additional girl power with this mystery detective adventure game called The Colonel's Bequest.

Imagine an Agatha Christie novel. Itâ€™s the year 1925, the setting is a large mansion in New Orleans filled with guests and a rich and rather old Colonel who is about to read his final will. As you might have guessed by now, everyone is after his inheritance and people are about to die. Itâ€™s your task to find out who the mysterious murderer is.

The game initially announces itself as a stage play introducing each character, which in all honesty consist mostly of your cliché murder mystery characters. Weâ€™ve got Laura Bow, our main heroine and Lillian Prune the friend that invited Laura to accompany her on her “fun family reunionâ€. Then weâ€™ve got the Dijon family members with Colonel Henri Dijon (most likely a nod to the boardgame Cluedo featuring Colonel Mustard) taking the lead as the grumpy old uncle bound to his wheelchair. Letâ€™s not forget all of the staff members, Fifi the sexy young French maid, Jeeves the silent butler and Celie the voodoo cook. Celie is actually one of the few characters that is actually helpful and friendly towards Laura, well, at least when you retrieve her missing necklace for her. Just explain to me, how do you lose a necklace to a dog in the first place? Amongst some of the other family members weâ€™ve got ourselves a troubled Hollywood actress, a slick and sly womanizer and an alcoholic aunt, but hey, who doesnâ€™t have one of those around in the family?

The game in essence is about the investigation of the characters and exploring the environment of the mansion and its surroundings. In terms of scoring the game is really an odd one out for the likes of Sierra games. There is no typical scoring system which you can keep track off. Instead the total of your investigation skills is shown at the end of the game. The game is divided into several Acts. Discovering a certain fact, whether it be by spying on people or discovering a gruesome murder, will trigger the next Act. Itâ€™s crucial in the gameplay to find as much information about each characterâ€™s background and how they relate to other characters. You can ask the characters about other persons or objects you find to discover clues. Their responses might just tell you a bit more about someone or something. In fact, itâ€™s even possible to finish the game without solving any puzzles or discovering clues about the characters or the murderer.

The atmosphere of the game is very solid. The animations and artwork are just fine, there is a lot of detail to be found in every scene. Inside the house you can find flickering lights, crackling fires and even your own reflection in mirrors. Sometimes you can even spot a dark shadow figure creeping past the windows. Could it be a salesman or Jehovahâ€™s witness? Better lock those doors then! Outside you can enjoy the sight of fireflies, birds and other wildlife that can be spotted and heard. The musical theme and the sound effects are also nicely done here. The game features a lovely musical score which is fitting for that particular era and helps build up the ominous ambiance.

But be careful with Laura! Because even though sheâ€™s a strong and independent young woman, death lurks behind every corner. Position yourself under the chandelier for example and Lauraâ€™s light will douse. Walk too close to that rickety balustrade, she will die. Mess around with the suit of armour, she dies. Approach a wild horse? Thatâ€™s right, she dies… One of the funnier death scenes, is when you try to take a shower resulting in a scene which is a tribute to another showering scene from the master of suspense himself, Alfred Hitchcock.

Although the game doesnâ€™t seem to have any bugs, it does have a very obscure scene that can only happen with a chance of 1:200. When stepping outside the mansion near the statue scene, you can witness a flying statue if youâ€™re lucky. Strangely enough the statue sounds like a shooting plane flying by. Apparently, the scripting part of the scene was wrong and instead of showing a proper plane (or is it a propel plane?) it inadvertently showed a statue flying by.

The Colonel's Bequest is an old and maybe even outdated game. It relies on the traditional Sierra text parser engine. Itâ€™s also full of corny and shallow characters and death can be a tough penalty for the curious player. Yet personally, I loved every bit of it. The mystery setting, the animations, but mostly the suspense and the whole “whodunnitâ€ theme. Is it replayable? Well, technically yes, but in all honesty, I doubt many people will replay this after the first go. I did though. And I must admit, I almost liked as much as I did the first round. The hardcore adventure gamers, will want to play it vanilla the first time and then go for all the clues and investigations in the later playthrough. Itâ€™s a Sierra game that stands out of the other titles and in my opinion, that alone helps making it an outstanding game. The official box also contains lots of goodies, including a notebook and pencil for your custom notes. So, if you can handle the thrills, I suggest you put on that deerstalker, put in a pipe and repeat after me: “Elementary, my dear Laura Bow!â€

beranmuden:
Feel free to share anything about The Colonel's Bequest (1989) here!
[Reply] 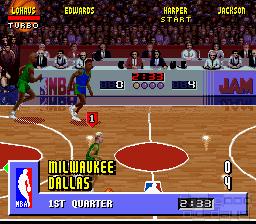