King's Quest IV: The Perils of Rosella
for PC (DOS) 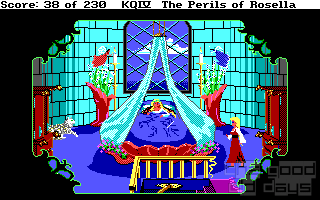 Here is the tale of Rosella and a terrible, horrible, no good, very bad day. Offered up as a sacrifice to a ferocious three-headed dragon in King's Quest III: To Heir is Human, she was narrowly rescued by her long-lost brother, Alexander. They've no sooner returned to Castle Daventry, the family reunited at long last, when King Graham collapses from an apparent heart attack. Now, without a moment to catch her breath after nearly being dragon food, Rosella must embark upon a dangerous quest to save her father's life. In the process, she must overcome evil fairies, trolls, sharks, snakes, ogres, whales, zombies, mummies, witches, ghosts, goons… hey, nobody said carrying on this family's legacy was going to be easy.

To elaborate further on the plot, the story is set in motion when a grief-stricken Rosella hears a voice emanating from the magic mirror. It belongs to the fairy Genesta, from the far away land of Tamir, who summons Rosella there to obtain a magic fruit which will heal her father. Of course, Tamir is in a state of crisis, and besides obtaining the fruit, Rosella also must rid the land of the evil fairy Lolotte and recover Genesta's stolen talisman, or else Genesta will die within 24 hours and won't be able to return Rosella to Daventry. Tamir is a beautiful yet often deadly place, and Rosella's journey will not be easy. Besides avoiding the hazards I mentioned above, she must also aid many good characters along the way, and find many obscure (and well hidden) items to assist her. Will Rosella be up to the task? If you, the player, are at all familiar with the world of King's Quest and the minds of Sierra developers, she undoubtedly will be.

Like most entries in Sierra's flagship King's Quest series, The Perils of Rosella was a game of firsts upon release. It was the first game to utilize their brand-new Sierra Creative Interpreter engine, SCI, which would eventually become a hallmark of the “golden age” of adventure games (an alternate version using the old AGI engine was also released for users with lower-end systems); it was the first commercially released game to support optional sound cards; it featured the same locations in both day and night form; and it was one of the first ever titles to feature a female protagonist, a rarity in the then “male dominated” world of computer gaming.

From a technical standpoint, the advancements are a huge leap forward. With the higher resolution graphics afforded from the SCI engine, the EGA backgrounds really stand out and are remarkably detailed for 320x200 pixels, 16 color images. As well, William Goldstein's musical score is beautiful, and absolutely must be played back on an MT32 to be fully appreciated (for their first ever game to support the sound module, Sierra certainly took advantage of its capabilities).

Interestingly, there are two main versions of the SCI edition, the second of which came out in 1989. Many of the backgrounds were redrawn to be less cluttered and more streamlined, and feature more shading and depth. This was partly done to allow one screen to serve as both the day and night backgrounds, with a starry sky overlay inserted over the day sky. In the initial release, the day and night cycles each had their own screens, which took up more disk space. Besides these graphical changes, a few music cues were modified and Rosella's default walk-speed was sped up. As to which version is better is a matter of preference – for me, while the redrawn backgrounds are a bit cleaner and less AGI influenced in appearance, the original night screens are far more effective than having a night sky pasted over scenes which are otherwise brightly lit. Had palette rotation been utilized, as it was for later SCI games, the results would've been more effective. Either way, both versions have their merits and either is worth a look.

From a gameplay perspective, King's Quest IV is certainly enjoyable, and the pressure for Rosella to save her father does add a certain pressure and tension. However, it does feature many of the frustrations Sierra became infamous for. Death is always lurking around the corner, for merely falling off a small cliff onto a sandy beach will quash the life out of Rosella. She can also fall off several treacherous spiral staircases, so take care when climbing. The infamous troll cave, necessary to pass through in order to obtain the fruit, has the troll trigger at completely random moments, and there's no way to escape him. Saving and reloading is the only option. The same random trigger mechanism applies to the shark while out in the ocean, and swimming offscreen won't save Rosella from re-enacting the opening sequence of Jaws. As well, there are a few necessary items so well hidden, or that have a very short timespan in which they can be obtained, that first time players are bound to miss at least one. Anybody who can beat this game without saving once should win a car.

Despite its difficulties, King's Quest IV is a worthy entry in the series and is ultimately a rewarding experience. Casting Rosella in an attempt to woo more female players paid off, and Sierra followed this trend by introducing Laura Bow in 1989's The Colonel's Bequest. So jump into the magic mirror and be whisked off to Tamir, and never, ever forget: horse bridles are always concealed in shipwrecks. 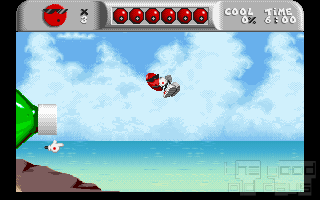