Temple of Terror
for Gamebook
Also available for: ZX Spectrum 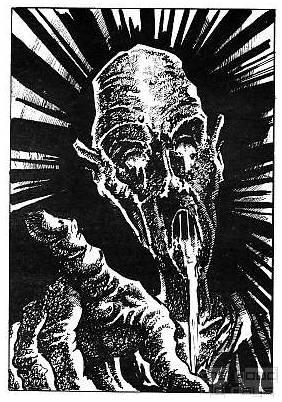 [LostInSpace] Pencils sharpened and dice ready (or should I say: dice throwing app launched?). Our journey leads us to the Temple of Terror. Let's hope it's not all in the name. A lonesome adventurer just happens to be at the Stonebridge court at the wrong time and learns that all of Allansia is threatened by the dark proceedings of the evil Malbordus. Travelling to the Temple of Terror, he is supposed to take the dragon artefacts hidden there to safety, because they would enable the dark elf to conjure a dragon which would take him to an army in the Forest of Doom, ready to bring death and despair over the land.

[Mr Creosote] As usual, the fate of the whole world lies in the hands of a random adventurer. Wizard Yaztromo is responsible for hiring him. Wait a minute, Yaztromo? Right, we've already met him in Forest of Doom. Which author Ian Livingstone cannot resist rubbing out noses into, reminding us of the painful experience right in the opening paragraph:

The complete forest is traversed in two whole sentences, completely without danger thanks to Yaztromo's power. Which begs the question why he sent several adventurers to certain death just a couple of books earlier. Oh, well. Now we'll be facing this Malbordus. So we'll need fresh supplies of adventurers.

[LostInSpace] Selecting the correct path is essential for the further outcome right from the start. You can either take the land journey though the desert or take a ship to Port Blacksand.

[Mr Creosote] A choice which should be easy for veterans. Some interchangeable desert or Port Blacksand, the legendary City of Thieves? Surely we will want to re-visit that – even if it will be just a short one, this quick glance will remain the highlight of the book.

[LostInSpace] Yes, it will indeed be hard to avoid a pub brawl there and even the captain who is supposed to take you turns out to be a scoundrel. The ship sinks on the high sea and without a big stroke of luck, the adventure would be over already. Finally, you end up in the desert anyway.

[Mr Creosote] A chapter which I found quite uninspired. When you finally reach the temple, half of the book is already over. Without anything noteworthy having happened, right?

[LostInSpace] During the journey, you have to face a pterodactyl in a dogfight. In the middle of the desert, you meet a mysterious trader who offers things like a bracelet made of a mermaid's scales or onyx eggs. These items will become useful later on, if not essential, to master particularly dangerous situations. Meaning decisions influencing whether the adventure can be won at all are taken quite early on. The journey to the temple is significant, because following the wrong path will make it impossible to finish the game later on. Last, but not least, it is also kind of a race against Malbordus to reach the temple first.

[Mr Creosote] Good point. The book's premise is indeed quite interesting: our hero does not infiltrate the bad guy's fortress, as usual, but rather the bad guy is also just a visitor in this location. Both actors are looking for the same objects, on neutral ground.

[LostInSpace] Not quite neutral. The plot later reveals some secrets about the temple. It is ruled by the evil Leesha, guarded by her disciples of darkness. She only tolerates a couple of artists with an obvious deathwish, who are in competition to decorate the temple with their works. As Malbordus is also possessed by the dark side, they will become allies later. Leesha, with her fanatic narcicism, even made it to the cover illustrations of some editions. Within the book, she only has a minor role, however. 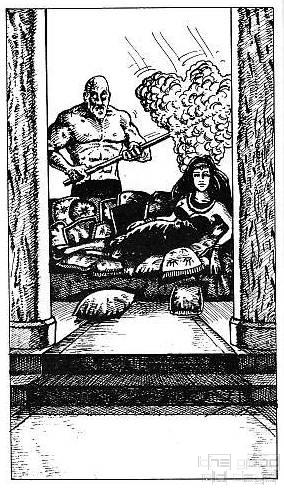 [Mr Creosote] Nevertheless, one of the more interesting facets of the story. Particularly, more interesting than Malbordus himself, because with him, there is basically no interaction. It would have been my expectation to meet him repeatedly, maybe snatch one of the artefacts right from under his nose (or the other way around, depending on the choices made). Though nothing along those lines ever happens.

[LostInSpace] Malbordus only appears at the very end, as a kind of final boss. Instead of seeking direct confrontation, he sends his messenger of death as well as an assassin. And let's not forget all those traps and beings which haunt the temple and make us draw our swords time and time again. Though Livingstone has not designed the book all around fighting. Rather, quite often, useful objects will save us. For example using a mirror to reflect the basilisk's gaze. Driving our sword into the heart of a giant sand worm, we gain its tooth, which is the only weapon against the evil Leesha.

Instant death or slowly wasting away?

[Mr Creosote] Though is this a good or a bad thing? Sure, always relying on lucky dice throws becomes rather tiring and will likely lead to failure at some point. On the other hand, using specific objects as gatekeepers to pass certain choke points is just Livingstone's usual method to force us to find exactly the “one true path” through the book. If you have selected “left” instead of “right” just once anywhere earlier, you won't be carrying something essential. Which means unavoidable game over later on. Without even a slim chance at lucky throws.

Finally, Malbordus himself is the polar opposite: we are facing him in a bog-standard swordfight. Sure, he is a strong opponent, but there is absolutely nothing special about it. Incredibly anticlimactic.

[LostInSpace] Obviously, both luck with the dice and making the right decisions is necessary. The book is very demanding in this respect.

[Mr Creosote] Because you need to find many objects, not just the dragon artefacts, to deal with opponents and traps, curiosity and an urge for exploration are necessary. In this respect, the Messenger of Death is actually a good compromise.

In typical Livingstone books, there are many sections which will end in instant death just for looking around the wrong corner. This only occurs rarely in this temple. Instead, you basically receive an “account” with several points which only leads to death on complete depletion. The in-game explanation being: only after being faced with all the magical letters of the word DEATH, you die.

[LostInSpace] The player is even supposed to show some finesse dealing with the inhabitants of the temple. Several times, we will meet an undead being whose hand reaches for a sword stuck in the ground, or a torture victim which can be freed or a tiny creature which would be easily disposed of with the sword. But violence is not the answer to these. Rather, these victims will move the plot forward and help the player understand certain connections or they will even help with the solutions of some puzzles. There is a touch of an adventure game there.

[Mr Creosote] Some of these may be nice ideas. Nevertheless, it all felt randomly thrown together, without any recurrent theme. Similarly, most opponents and traps are in no relation to Malbordus. For me, it was all totally random.

[LostInSpace] What you call random should be understood as variety. In a typical dungeon crawl such as Eye Of The Beholder, you will wander through the same boring surroundings for hours, monotonously killing each and every monster. This gamebook's temple is also a kind of dungeon, but one offering variety: each room has its own description. While in a dungeon crawl, the design changes only every level, the reader of this gamebook will find a change in the surroundings at practically every branch and every corner.

[Mr Creosote] Just that according to the plot, this temple is actually supposed to be a complete city. Though one which never gives the impression of really being a functioning city. Things are happening here and there, and in the best cases, those may be interesting, but in most cases, they are completely generic. Nothing ever adds up to a bigger picture.

[LostInSpace] At least, the author attempts to build such a bigger picture by picking up plot threads from the beginning in the course of the adventure. Yaztromo gets involved several times. For example, towards the end, a messenger reaches us in the temple, handing us a hammer to destroy the dragon artefacts just in time.

[LostInSpace] The wizard also supplied us with four magic spells. Those can be selected from a list of 10. However, there are few places to use them and after passing a certain point in the temple, magic cannot be used at all anymore. Suddenly, we are forced to actually look for keys to replace the now useless “open door” spell. On the whole, the magic system is a nice touch, but it is hardly present. 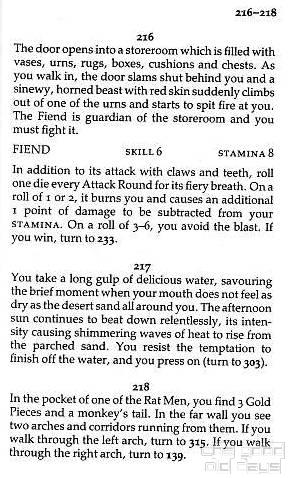 [Mr Creosote] Magic, the series' eternal problem. It's the classic issue: you are supposed to select spells right in the first section, but based on what information? Which spells will help, which ones won't? It is pure guessing. On the other hand, nice idea: using the spells which help you through several tricky situations, but it will cost you some strength points.

[LostInSpace] The spells can all be replaced by other means. Surviving the desert without the spell to create water is possible. This makes magic expendable, but the wizard's gifts make some situations simply more convenient.

[Mr Creosote] I considered it basically as four situational jokers to draw in danger. You receive a limited wild card to conjure yourself out of critical places, but pay with some of your life energy. This way, even the dilemma of taking an uninformed choice at the beginning isn't even that severe.

[LostInSpace] Nevertheless, weapons will need to be used regularly. Weapon skill is one of the basic character stats determined at the beginning. The maximum being 12, but with a value lower than 12, the opponents turn quite nasty. Making matters worse, a whole 3 points are lost crossing an unavoidable room. Correctly answering an oracle's question, you can win back 2 points. I'm really asking myself whether the difficulty level can be called balanced.

[Mr Creosote] This is Livingstone at his best. After all, Deathtrap Dungeon remains the most popular of his early books, and we have the same effect there. You could almost believe that nobody honestly throws the dice

[LostInSpace] Maybe that's reserved for the true nerds. The book was interesting to me in another way: long-term motivation. The plot is strongly branching and finding the way to the final goal is appropriately hard. On first read, many questions remain unanswered and this increases curiousity. Even knowing the ending, a second look is quite recommendable.

[LostInSpace] Taking the time to really cover the complete book, you will find many details making up a coherent and multi-faceted work. Nevertheless, I would not recommend this book to total beginners, because the course of the plot is more or less dictated by finding the one true path and each small deviation will sooner or later lead to failure. On top of that, quite a bit of luck with the dice is necessary to live through the fights. Those who are not scared by this prospect will find a first class gamebook concerning variety and storytelling.

[Mr Creosote] For me, it is unfortunately a rather forgettable book. It follows the same formula as almost all of Livingstone's books: find the one true path through the story, spiced up with almost impossible fights. The overall impression is dictated by the quality of worldbuilding. The temple was not as weak in this respect as feared when recognizing the link to Forest of Doom. On the other hand, it is also nowhere near as good as the City of Thieves. Neither the bad guy, nor the setting make exploring the meaningless “left or right” branches particularly interesting. Small highlights are not sufficient to exceed mediocrity. 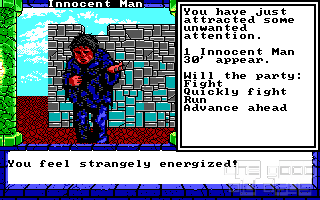